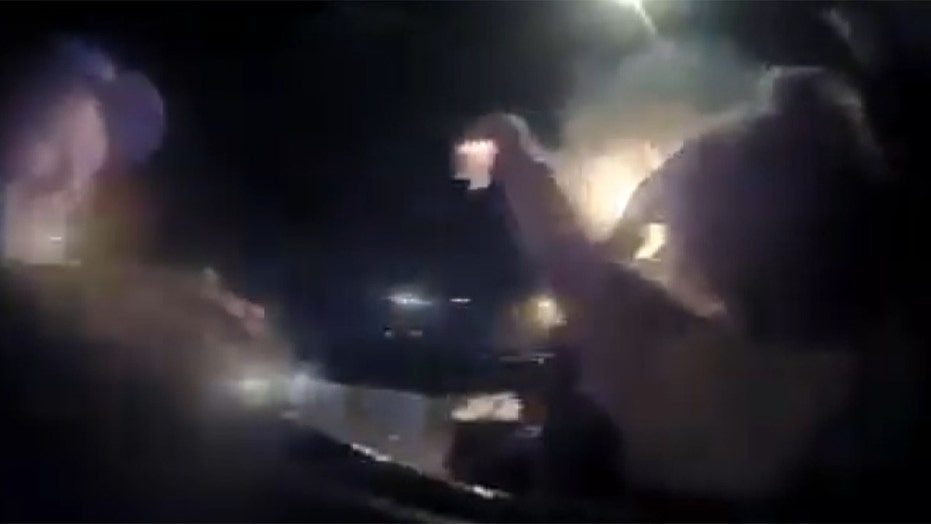 A suspected drunken driver slammed into the woman’s truck in a wrong-way crash – pinning her lower body inside the vehicle as it crumpled, the Moore Police Department wrote on Facebook.

The video shows several officers, identified only by their last names, and some civilians as they struggle to both keep the flames at bay and free the victim.

It begins taken from a patrol vehicle’s dashboard camera: The first of the responding officers arrives at a chaotic scene – with mangled car parts strewn across the highway.

A man runs up, pointing frantically to a fiery wreck that’s still dozens of feet up the road.

He says that someone’s still inside.

“We have entrapment in the fire,” the first officer calls in as he begins to run toward the vehicle.

The video skips ahead. The officer calls out for a fire extinguisher and takes command of the scene, where two men are already struggling against the vehicle’s broken door. He flips out an expandable baton, smashes out the back window and tries to free the victim from another angle – but it doesn’t work. Smoke is billowing out of the engine bay.

“Can you come to me?” he asks the driver.

She looks and sounds dazed and appears unable to escape on her own as she begs for help.

More officers arrive and they struggle again, but still can’t pull her free. Someone else runs up with a fire extinguisher – one of five that the department said were used during the rescue.

The video ends as more officers arrive and continue to try and pry the victim free.

Ultimately, the department said, the victim was saved, although the video ends before she is fully freed from the wreckage.

“The actions of the involved officers and civilian motorists are nothing short of heroic,” the department wrote. “These men are the embodiment of our ethos, ‘Service before Self.’”