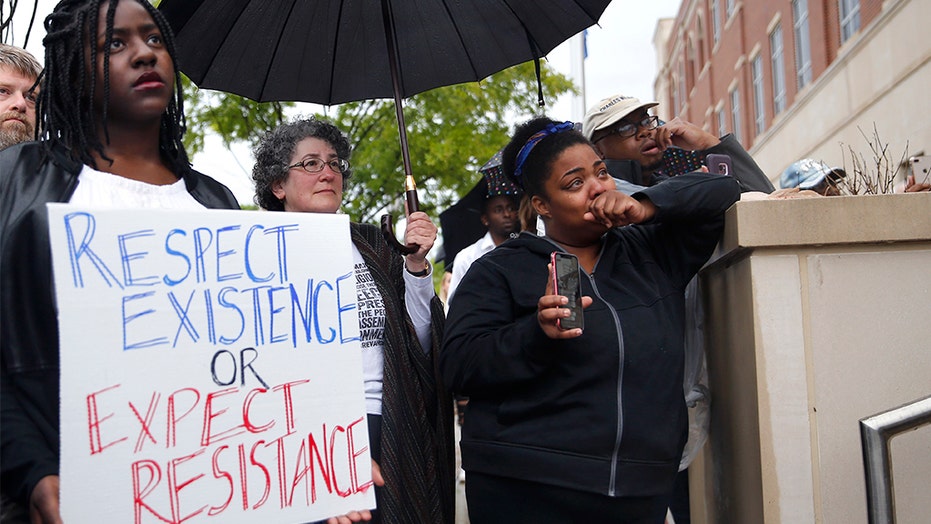 Attorneys representing an Oklahoma City suburb say police were justified when they shot and killed a naked and unarmed black teenager who authorities believed had committed a home invasion.

“Lewis was justifiably shot by a service weapon after being ineffectively tasered," city attorney Taylor Clark said in a court filing Wednesday responding to a federal lawsuit by the parents of 17-year-old Isaiah Mark Lewis.

Lewis' parents maintain that officers acted “unnecessarily and unjustly" when they shot their son back in April.

In this May 3 photo, people listen to speakers at the Edmond Police Department during a Black Lives Matter rally. (Sarah Phipps/The Oklahoman via AP File)

Sgt. Milo Box and Officer Denton Scherman from the Edmond Police Department responded to a 911 call by a woman reporting a domestic disturbance at her neighbor's house on April 29. At that time, a woman who identified herself as Lewis' 18-year-old girlfriend, Kamri Pollock, tried to take the phone from her neighbor to tell dispatchers that her "boyfriend just flipped out. I have no idea what's going on."

Other 911 calls later reported Lewis stripped off his clothes as he ran down the street. Police later said they chased him as he jumped fences before he broke into the home where he was shot.

Lewis allegedly attacked the two officers, who ineffectively tazed him, causing them to fire their handgun.

Oklahoma County District Attorney David Prater has yet to decide whether the shooting was justified under state law, but attorney Andrew M. Stroth who is representing the victim's family, said he does not think that Taylor's rebuttal to the lawsuit will impact the court's decision to find the officers culpable in Lewis' death.

“The family is not surprised by the city’s response,” Stroth told The Associated Press. “The city fails to take accountability for the unjustified and unconstitutional shooting of unarmed Isaiah Lewis.”

Both officers have been placed on paid administrative leave.