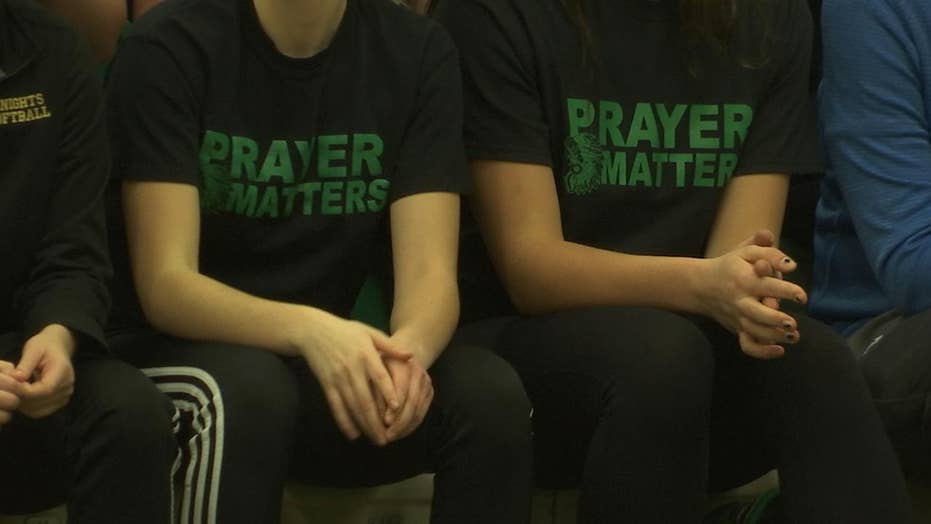 Members of an Ohio community are fighting back after a Wisconsin-based anti-religion group tried to pressure a high school to ban its long-held tradition of praying before sporting events.

Upon receiving FFRF’s Jan. 18 cease-and-desist letter, the school district halted the custom of having a local pastor give a nondenominational prayer before sporting events.

"We're pleased the public school district took quick action to halt the practice of inflicting coercive Christian prayers before what is essentially a captive audience," FFRF co-president Annie Laurie Gaylor said. "Public school students should not be expected to pray to play."

First Liberty Institute, a nonprofit law firm that advocates for religious freedom, told Fox News they have an attorney on the ground investigating on behalf of the students and their parents.

“These students have every right to pray before their sporting events,” said Deputy General Counsel for First Liberty, Jeremy Dys. “Atheists need to stop stalking and bullying religious students across the country and recognize their constitutional right to freely exercise their religion.”

West Branch Superintendent Timothy Saxton said his district is a “deep-rooted Christian and faith-based community” that holds prayer near and dear and he called FFRF “an outside organization.”

“The only opposition that I have had anyone voice to me is through this letter,” Saxton told Fox News. “If anything we’ve had a strong positive show of support.”

Marcie Curry, a parent in the district and West Branch alumna, told Fox News she was “disappointed” with the letter.

“They don’t know us, have never attended a West Branch sporting event or even stepped foot in our community.  Yet they believe they can tell us to stop one of our cherished, long standing community traditions,” Curry said. “That just doesn’t seem right.”

Not everyone is opposed to the ban, though.

“I think it’s the right call,” Amanda Kaiser, a mother of three children in the district, told Fox. “If we can’t include everybody, then we shouldn’t give anyone special privileges.”

Although one student told local newspaper The Vindicator that the controversy set off a “civil war” in the school, it has also created a good amount of solidarity in the community.

Parents Brooke and Brandy Pidgeon, with a team of volunteers, banded together to sell over 4,000 “Prayer Matters” t-shirts in the community of fewer than 900 people.

The idea came after their son, Nicholas, one of the school's basketball players, said the phrase “prayer matters” during family dinner.

Before the tip off, Jonny Ross, a junior at the school who is a leader of Fellowship of Christian Athletes, asked all to rise for the National Anthem and then stay silent for either reflection, individual prayer or some other expression.

Local Pastor John Ryser, who said the prayer over the morning announcements when he was in high school and has been leading the prayer for the last 12 years, said it’s been going on for more than 40 years.

“Everybody’s really coming together in support of the prayer issue, and we’re having more conversations about prayer and about the gospel, the good news about Jesus Christ, than we’ve ever had before,” Ryser said.

One of the nation’s most prominent Christian leaders, Reverend Franklin Graham, even weighed in.

“Let’s join the Warriors in this battle with our prayers,” Graham said.