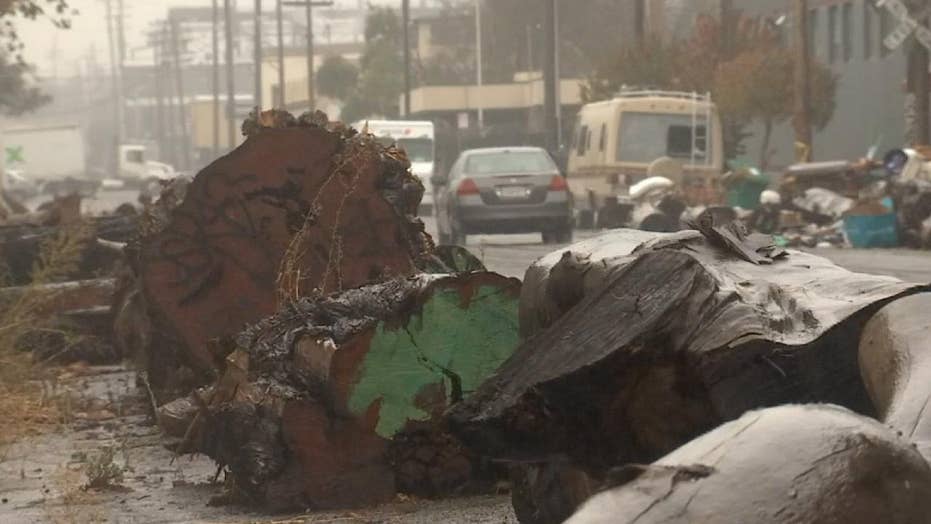 Someone in Oakland has been taking matters into their own hands by placing car-sized logs in front of businesses in an effort to deter transients from setting up camp in the California city.

While the motive is clear -- to keep the homeless out -- no one person or group has come forward to say they are behind the long line of logs that have been preventing the homeless from parking their RVs or dilapidated vehicles in front of businesses.

City officials have complained the logs have blocked crews from cleaning up the areas of Oakland but admit they have done little to root out the culprit.

Councilmember Lynette Gibson McElhaney told the East Bay Times (EBT) she's reached out to local business owners but that no one would fess up to doing it.

Sean Maher, a spokesman for Oakland's Public Works Department, said he considers the logs an "intentional obstruction of the public right of way," but admits the department has not reached out to local businesses to get to the bottom of the mystery.

Greg Anderson, manager at the Oakland Music Complex, told EBT that he doesn't have a problem with the logs and blames the city for not addressing the homelessness situation earlier.

"Since the city does an extremely poor job in preventing homeless encampments from developing in West Oakland, these logs that were placed out there by a neighboring company have been instrumental in minimizing these encampments," Anderson said in an email.

But not everyone is on board with the DIY approach.

"If all these homeless people could turn themselves to stone, then this would not be a problem. But because they don't have that capacity they get pushed out by the real stones and boulders, which appear to be much more acceptable and aesthetically pleasing," she said.

Still, the anti-homeless backlash from business owners and residents have been on the rise in Oakland -- and across the state -- for quite some time.

Residents recently told Fox News they are tired of the uptick in numbers and the lethargic response by elected city officials.

Oakland saw a 47 percent jump in homelessness in two years -- one of the largest surges of any California city, according to a one-night street count released in July.

The count, which used federal guidelines, showed Oakland had 4,017 homeless people in 2019, up from 2,761 in 2017. The increase puts the city's per capita homeless rate higher than neighboring San Francisco and Berkeley and comes at a time when several West Coast cities are struggling with a homeless crisis that's been driven by rising rents, drug addiction, mental illness and pushback from progressives.

The jump in stats has led to unconventional suggestions by fed-up Oaklanders like Gene Gorelik, who suggested the homeless should be put on a party bus stocked with alcohol, driven over the border and left stranded in Mexico. At one point, Gorelik tried to bribe the homeless to leave but was eventually shouted down by homeless advocates.

The mystery logs in Oakland come two months after residents in neighboring San Francisco placed large boulders to keep the homeless off their sidewalks.

A group of neighbors in San Francisco had two dozen boulders placed along a residential road to deter people from camping out. They have since been removed. (KTVU)

In Ingleside, frustrated residents erected a plywood wall on a narrow pedestrian pathway to keep away transients who used the alley outside people's homes as a toilet. The nights it wasn't used as a bathroom, the area became base camp for illegal drug dealing, neighbors told Fox News during a visit in November.

Caltrans (the State of California, Department of Transportation) has also been considering whether to put boulders or some other type of barrier to deter encampments in West Berkeley, where the homeless have made underpasses and train tracks their homes. Twice a month, Caltrans cleans the encampments, forcing dwellers to briefly leave but then allowing them back in once the sites are cleaned.