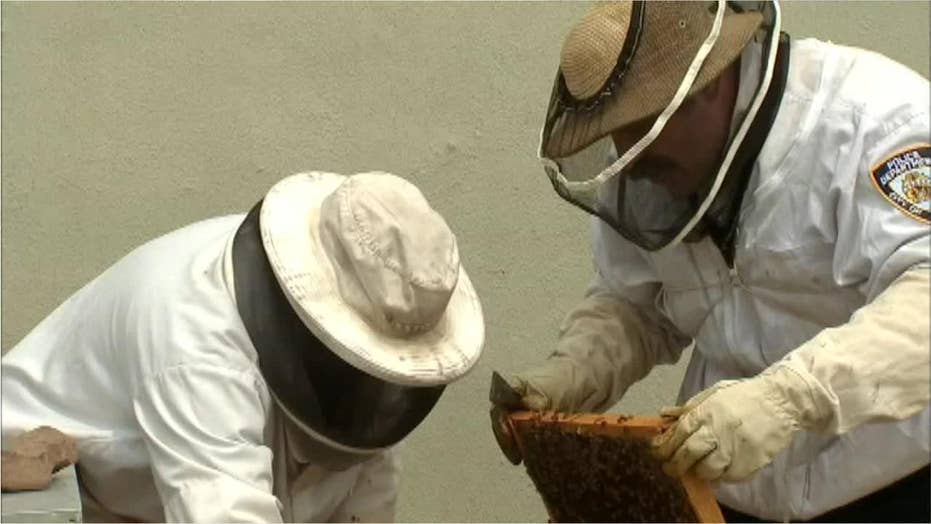 NYPD officers fighting to save honeybees

The declining honeybee population is a danger to American crops and the economy. A grassroots program featuring a pair of NYPD officers is trying to keep the bees and their data alive.

The New York Police Department’s “Beekeepers” — just two officers dedicated to rescuing the honeybees that swarm New York City neighborhoods — are among a devoted group of bee lovers across the nation working to save the incredibly important insects, while the U.S. government seemingly tells them to buzz off.

Darren Mays and Michael Lauriano are first and foremost police officers — but when a swarm of bees is reported to 911, the “bee whisperers” fly into action.

FLORIDA BEEKEEPER SAYS SOMEONE MAY HAVE POISONED MILLIONS OF HIS HONEYBEES

Officer Michael Lauriano, pictured here on the roof of the 104th NYPD Precinct in Queens, says he and Officer Darren Mays are similar to "bee whisperers."

“These calls can come pretty much 24 hours a day,” Lauriano, who’s assigned to the 1st Precinct, told Fox News from the 104th Precinct in Queens, where two hives — one with more than an estimated 40,000 bees — are located on the roof.

The infamous swarms that appear in the city are most likely from the hives of amateur beekeepers “who mismanaged it,” Mays, of the 104th Precinct, said.

The beekeeping duo said they work together on different shifts to respond to swarms in public areas, which Lauriano — who’s responded to recent swarms in Times Square and Tribeca that received much media attention — said are basically “people swarms.”

The NYPD's beekeepers estimated more than 40,000 bees live in one of the two hives located on the roof of the Precinct.

“These swarms tend to just gravitate to people," he said. "When the cops are there and they just have cordoned off, people aren’t really caring too much — but then when the beekeeper shows up, and puts the veil on, you’ll see the crowd just gather,” he said, describing it as a learning experience for those watching.

Swarms have appeared to become more frequent in the Big Apple after the city board voted in 2010 to legalize beekeeping, and an influx of keepers and hives came to New York.

Lauriano and Mays are part of a nationwide grassroots movement to save honeybees, according to beekeeper Noah Wilson-Rich, the CEO and co-founder of The Best Bees Company and a behavioral ecologist, who spoke with Fox News.

Officer Mays, left, and Officer Lauriano, right, told Fox News they both enjoyed beekeeping as a hobby before doing it professionally for the NYPD.

That “movement” comes as the U.S. Department of Agriculture announced July 1 it would suspend its collection of data on honeybees used by beekeepers to track bee colonies for their losses and growth, citing budget cuts. The Environmental Protection Agency, meanwhile, announced the restoration of sulfoxaflor, a pesticide some activists say could decimate the bee population.

Honeybees pollinate roughly $15 billion in food crops in the U.S. each year, according to the USDA and are responsible for one in every three bites of food we take — and their decline, happening at an alarming rate, is a signal of what may happen to the nation’s crops.

“Because bees equal food — that’s why we care,” Wilson-Rich said. “It’s not like it’s just an obscure little endangered species…This is actual food and that’s why everybody cares about this.”

Certain pesticides, such as sulfoxaflor, are deemed better because they're “more selective in their targets” as opposed to pesticides like DDT, which was sprayed from airplanes over neighborhoods throughout the U.S. and the use of which was stopped in 1972 after it showed toxic effects.

But even modern-day pesticides can be harmful to “good” plant pests, like pollinators, Wilson-Rich said, explaining that “taking all pesticides off the market” is risky, and plant diseases would need to be controlled in a different way.

With 2.5 million beehives in the U.S., it’s important to know the health of bees and their ability to help farmers pollinate crops — which explains the importance of the USDA’s bee report.

“If bees are dead, then the price of the crop goes way up because it’s all supply and demand,” Wilson-Rich said. If there are fewer beehives available for farmers to use and ultimately fewer pollinators, consumers will pay more money for food.

BEEKEEPER'S WARM-WEATHER WARNING: 'DO NOT BE FRIGHTENED OF SWARMING HONEYBEES'

Sen. Chuck Schumer, D-N.Y., slammed on Sunday the USDA’s decision to suspend its honeybee tracking, calling for officials to continue what he described as a “vital” practice.

“Our beehives throughout New York and throughout the country are dying off, and we aren’t sure why,” he told reporters. “One of the most important things we can do is collect data to find out which hives are dying and why.”

But Wilson-Rich said that if the government won’t help, the grassroots movement will do the job. His company of 71 beekeepers across the country are working with MIT and NASA to collect data about the health of honeybees, he told Fox News.

“This is what’s next,” he said of monitoring the honeybee population. “We’re the team that’s going to pick it up from where the government’s leaving off.”