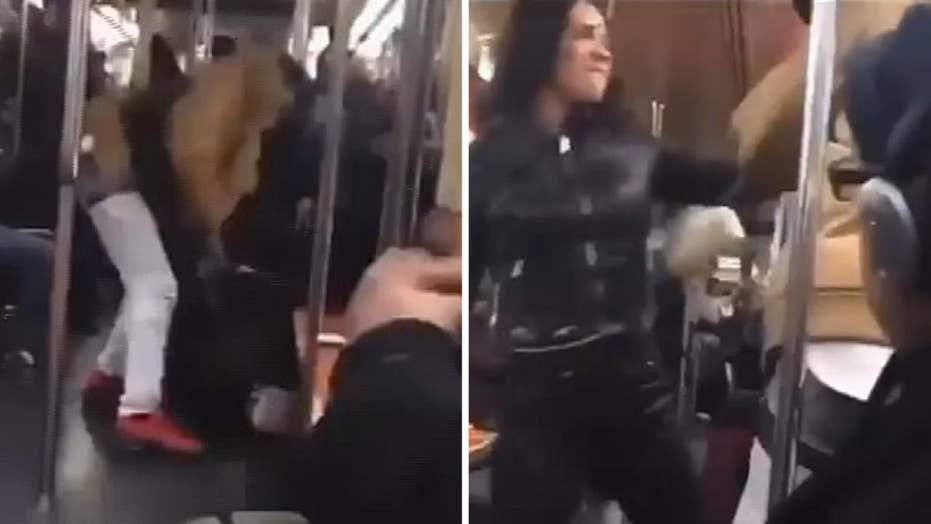 Raw video: Footage recorded on an MTA subway train shows a man and woman involved in a violent assault on New Year's Day.

A full-on brawl erupted in front of straphangers on a New York City subway train on New Year's Day in a disturbing video that was released by police.

The New York Police Department said the assault happened January 1 at 7 a.m. on a 6 train at the Elder Avenue subway station in the Bronx.

In the video released by police, a man in gray jeans and a caramel-color jacket punches and kicks a woman dressed in black before knocking her to the floor of the train.

The woman can be seen in another clip repeatedly punching the man.

In a longer clip of the footage obtained by the New York Post, the man can be seen dragging the woman by the hair out onto the subway platform and kicking her in the chest.

Investigators are looking to identify the two people involved in a New Year's Day subway brawl on a subway train in New York City. (NYPD Crimestoppers)

Straphangers -- who look on without intervening -- can be heard saying "Yo, step out man" while another person is heard saying "Happy New Year."

Officials said someone who saw the fight called 911 and officers arriving at the scene found the man, who appeared to be drunk. The man later refused medical attention from EMS. While officers were waiting for EMS to arrive, the woman told them she and the man had gotten into a verbal argument that was resolved.

The NYPD said the man told them the same thing, and police did not file a report at the time because no one seemed to be injured.

After the video of the fight appeared on social media, investigators are now looking to identify the people involved in the brawl.

The NYPD'S Sergeants Benevolent Association retweeted the original video after it was posted and called out New York Rep. Alexandria Ocasio-Cortez’s rejection of the state's plan to hire 500 additional cops to patrol the city's subways.

"Congresswoman Ocasio-Cortez doesn’t think the Governor should add 500 more MTA police officers to make the subways safer. Watch & you decide as a woman is assaulted, thrown to the ground and kicked," the SBA said. "This is a NYC subway."

Anyone with information regarding the incident is asked to call the NYPD's Crime Stoppers Hotline at 1-800-577-TIPS, or submit tips by logging on to the CrimeStoppers website, or on Twitter @NYPDTips. Police said that all calls are strictly confidential.