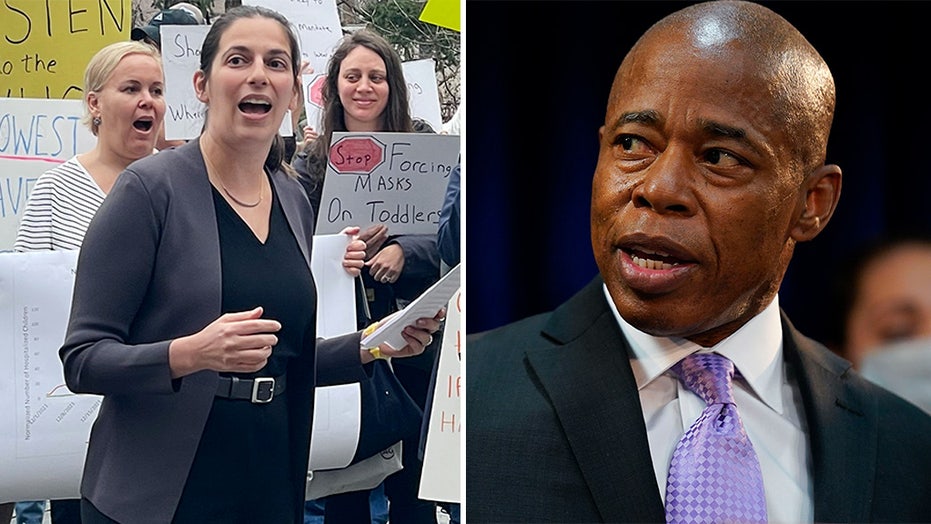 The panel reacted to the vice president's mask 'hypocrisy' and her deputy chief of staff becoming the latest staff member leaving her office.

New York City Mayor Eric Adams blamed the firing of a city employee on her own "inappropriate" behavior prior to her confronting him about "unmask[ing] our toddlers," as members of the public question a spokesperson's claim that Jampel falsely identified herself as a journalist.

Speaking to reporters during an unrelated event in Brooklyn, Adams said Wednesday he did not know who Daniela Jampel was when he saw her at Monday’s City Hall press conference and said he "did not make the call to fire her."

"When she tweeted," Adams said, "it was inappropriate, and the Law Department made the decision and notified me prior to that press conference of their actions."

He added: "I had no interaction with that at all."

Jampel worked for years as an assistant corporation counsel for the New York City Law Department before she was terminated on Monday, an agency spokesperson confirmed, shortly after she questioned Adams about his decision to maintain a toddler mask mandate.

A spokesperson for the Law Department said in a statement that the decision to terminate Jampel was made prior to Monday’s event, and was a result "troubling claims" she had made about her job for the agency.

"In public statements, Ms. Jampel has made troubling claims about her work for the city Law Department. Based on those statements, the decision had been made to terminate her prior to today," the spokesperson said in a statement Monday. "Today’s events, however, which include her decision to lie to City Hall staff and state she was a journalist at a press conference, demonstrate a disturbing lack of judgment and integrity. As of today, she is no longer an employee of the Law Department."

Jampel did not respond to Fox News Digital’s multiple requests for comment. Several social media users have questioned whether Jampel actually misrepresented herself, as was alleged.

A spokesperson for the Law Department did not respond to Fox News Digital’s follow-up questions Wednesday about Jampel’s alleged actions on Monday and the alleged behavior that led to her termination.

The New York Post cited sources in reporting that Jampel criticized Mayor Adams in a tweet about the child mask mandate, and described her Law Department job as defending "cops who lie in court, teachers who molest children, prison guards who beat inmates," according to the report.

The Daily Mail described Jampel was a mother of three young children who was on maternity leave when she was terminated.

On Monday, Jampel attended a press conference in the City Hall building in Lower Manhattan, where Adams announced the city would be erecting billboards in parts of Florida in opposition of the state’s parental rights in education law. But roughly 21 minutes into the event, Adams was taking questions from reporters, when Jampel spoke up.

"Three weeks ago, you told parents to trust you, that you would unmask our toddlers. Ten days ago, you stood right here and you said that the masks would come off April 4, that has not happened," she said. "You reneged on your promise, and not only did you renege on your promise you had your lawyers race to court on Friday night to overturn…"

Her voice trailed off as someone tried to interrupt her. But Adams responded: "Let her finish, ‘cuz you let her start."

"Turn on your phone, so you can get my answer correctly," the mayor told her.

Adams, whom the Post described as appearing annoying and caught off-guard, acknowledged that he did make the prediction that he would be announcing the elimination of the toddler mask mandate on Monday.

"I also stated if we see an uptick, we will come back and make the announcement of what we’re going to do. We’re going to pivot and shift as COVID is pivot and shifting," he said. "There’s a new variant. The numbers are increasing. We are going to move at the right pace, and that’s the role I must do."

Jampel told the Post: "I am retaining counsel and will not litigate in the press." Her social media page describes her as being one of the founding members of the local group Keep NYC Schools Open.