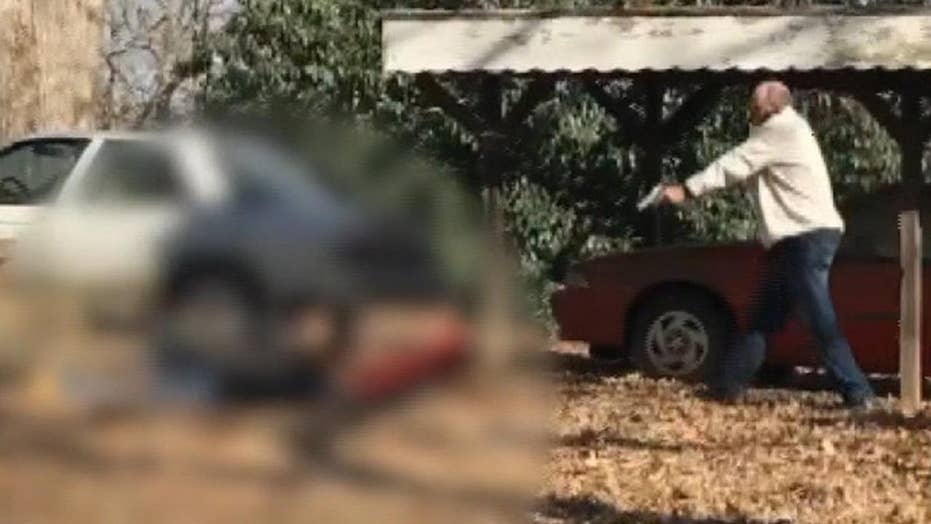 Man who was alerted by neighbors about suspicious activity holds three men at gunpoint after they allegedly broke into his parents' home.

A group of accused burglars walking out of a North Carolina home they'd allegedly just pilfered Sunday were met by an unexpected sight -- a man pointing a gun at them.

Stephen Routh told FOX8 he watches over his parent's home in Asheboro and headed over after receiving a call about some unusual people seen on the property.

Routh arrived just as the three suspects were trying to leave, using the home's back door, and said he held the group at gunpoint while he was on the phone with 911 dispatchers. The entire incident, including Routh ordering the trio onto the ground, was captured on video.

“I had the gun and they were coming out, and as soon as they saw the big gun pointed at them, their hands went up," he told FOX8.

Routh said the group ransacked the inside of the home, leaving broken glass everywhere and drawers emptied out.

“They know this is not their home. They know they had no business in here, and they mentioned they just thought they would just go in there and look around,” he told FOX8.

The suspects were 14, 15 and 17 years old, according to Routh. Police called the parents of the minors and took the 17-year-old into custody, FOX8 reported.

The group did not take anything of value before trying to escape, but Roth said he hopes the group learned a valuable lesson.

“There have been too many instances lately of home invasions and things like this where they get caught," he told FOX8. "And some people have been shot and killed, especially those home invasions. People are not taking this mess anymore."

The Asheboro Police Department is now investigating the incident.