A man was arrested in connection with the reopening of a New Jersey gym on Tuesday after the business began operating in defiance of Gov. Phil Murphy's coronavirus closure order.

At least one member of Atilis Gym was taken into custody by Bellmawr police, while three others were stopped and questioned after leaving the premises, Erika Shych of News 12 reported.

The man who was arrested reportedly refused to give his name to the authorities. Owners had previously told members that they must enter at their own risk and should consider themselves targets of law enforcement.

Fox News' Pete Hegseth had joined the gym's co-owner, Ian Smith, outside of Atilis on Monday as he and protesters gathered to speak out against the government's lockdown orders.

FLORIDA GOV. DESANTIS SAYS GYMS ALLOWED TO REOPEN AFTER BEING SHUTTERED DUE TO CORONAVIRUS 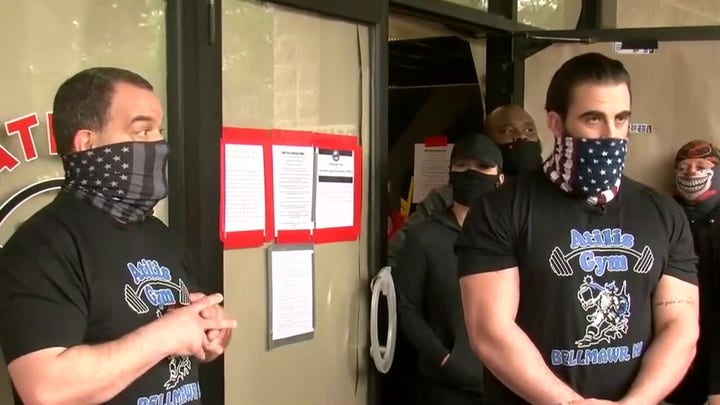 The crowd began chanting "USA" before Hegseth could even begin asking questions.

“We made the decision to open,” Smith told him, as he donned an American flag-themed facial mak. "We will not stand down."

Police later arrived on the scene to inform Smith he was in violation of the governor's orders, but allowed the reopening to continue and wished the protesters a "nice day" before leaving.

"Governor Murphy has presented zero plans and I think my business partner and I have a plan to keep people safe," Smith told Hegseth.

In a similar case earlier this month, Texas salon owner Shelley Luther was sentenced to be jailed for defying a local stay-at-home order and opening up her business. She was later released after spending two days behind bars.

As of Tuesday evening, New Jersey had over 149,000 confirmed cases of COVID-19 and over 10,500 deaths, according to the state's department of health.