But senators haven’t reached a deal.

Speaking from the Senate floor, Senate Majority Leader Chuck Schumer said "we have a lot of work to do" Monday regarding a tentative bipartisan deal on a bill to curb gun violence.

He noted the legislation "doesn't have everything we wanted" but would be "the most significant" on guns "in decades."

The deal comes after protracted talks between Democrats and Republicans over various proposals, including an assault weapons ban for those under 21 that was ultimately rejected.

The only proposal in the deal announced Sunday that deals with 18-to-21-year-olds is an "investigative period to review juvenile and mental health records, including checks with state databases and local law enforcement."

DAN CRENSHAW: IT IS DIFFICULT TO LEGISLATE AWAY ‘EXTREMELY RARE AND ANOMALOUS EVENTS’ LIKE MASS SHOOTINGS

Senate Majority Leader Chuck Schumer of N.Y., is seated before a Senate Rules and Administration Committee. On Monday, he addressed a gun legislation deal that could become law. (Elizabeth Frantz/Pool via AP)

The final framework includes provisions on straw purchasing firearms; support for state red flag laws; closing the so-called "boyfriend loophole" that allows court-adjudicated domestic abusers to buy guns if they were not married to their partner; and a clarification on the definition of a firearms dealer. The deal also includes several provisions on mental health and school safety.

Sen. Chris Murphy, D-Conn., who led the talk on behalf of Democrats, said he was willing to take incremental steps to ensure a deal gets passed.

Talks on gun legislation began after several mass shootings in recent weeks, including one in Buffalo N.Y., that killed 10 people and another in Uvalde, Texas that resulted in 19 children and two teachers dead.

Lawmakers still need to write the bill. PBS reported the package could cost somewhere between $15 and $20 billion, which could be offset by a Medicare rebate. 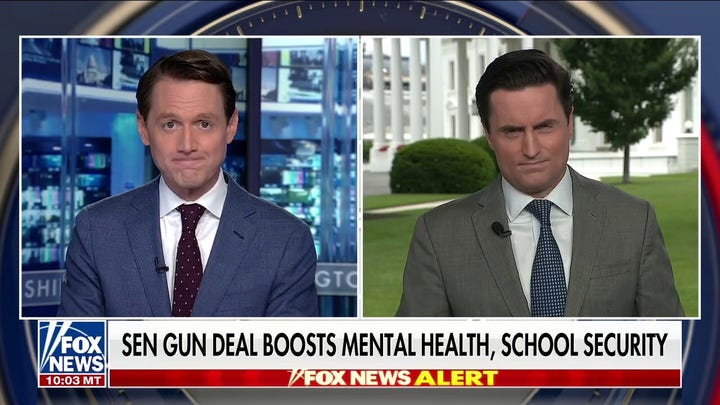 Fox News has reached out to the office of Sen. John Cornyn, R-Texas, one of the negotiators for the bill.