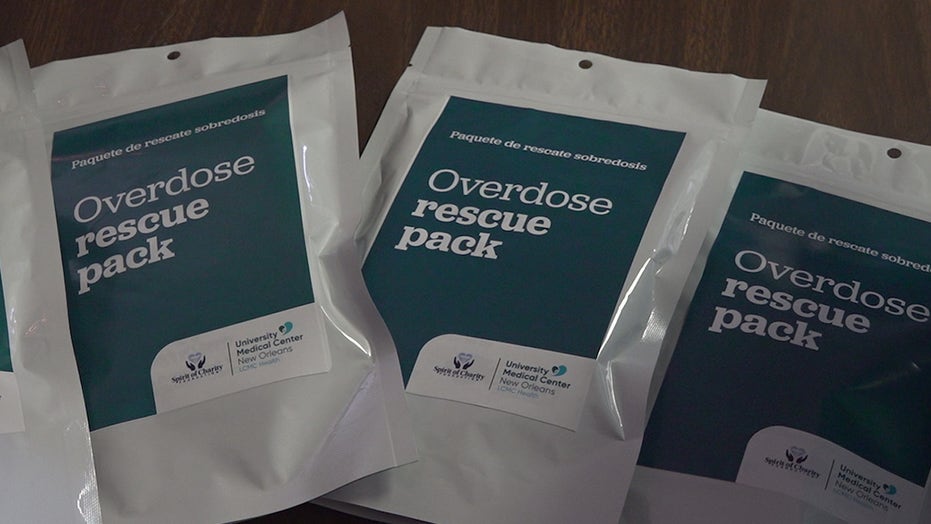 Health officials are now working to increase public access to the overdose reversal drug naloxone, commonly known as Narcan. Without a prescription, Narcan can cost over $100 at the pharmacy, but now a hospital in New Orleans is giving out the life-saving drug for free.

"This drug is not new," said Dr. Peter DeBlieux with University Medical Center New Orleans. "Discovering ways to effectively get it in the hands of patients and their loved ones is new."

Nearly 1 in 10 Americans struggle with addiction, according to Dr. Joyce Bracey.

In Louisiana alone, overdose deaths have doubled in the last two years.

FENTANYL OVERDOSES BECOME NO. 1 CAUSE OF DEATH AMONG US ADULTS, AGES 18-45: ‘A NATIONAL EMERGENCY’

"The hope is that people actually use this, and it saves lives," DeBlieux said. "With opioid overdoses, we often times see decreased respiration and respiratory failure before death. This drug, given nasally, just squirted into the nose can reverse that process."

Any patient who comes to University Medical Center with opioids in their system will be given an overdose rescue pack when they're discharged. Inside is the nasal spray with instructions on how to use it, as well as resources a person can access if they want to get help for their addiction.

Each overdose rescue pack includes Narcan nasal spray with instructions on how to use it.

Family members of those with addiction can also pick up a kit at their local fire station.

"We always want people to work towards not using drugs, but in the meantime, we want to keep people alive," said Dr. Joyce Bracey, a licensed addition counselor. "No matter how many times we have to use a life-saving overdose reversal drug for a person to bring them back to the world with us, we have to be grateful it was there to give them one more chance to realize that recovery is possible."

Bracey is the CEO of CADA, an addiction prevention and recovery center in New Orleans. She's seen the number of people seeking treatment spike in the last year.

CALIFORNIA DAD WHO LOST DAUGHTER TO FENTANYL POISONING SENDS MESSAGE TO BIDE: ‘MR. PRESIDENT, WHERE ARE YOU?’

"It's important for people to know they're not alone," Bracey said. "We all know someone who is dealing with this. Nearly 1 in 10 Americans struggle with addiction."

"It's very easy and not scary to use," Bracey said. "If you keep it in a safe place and have it ready, it will just give you more confidence."

Since 2017, more and more hospitals are choosing to send patients home with Narcan. More EMS personnel are also equipped with the drug, but public access is still limited.

UMC New Orleans is able to give out the drug for free thanks to a charitable donation from a family who lost a loved one to addiction. Health officials hope other initiatives, possibly from the federal government, will soon allow Narcan to be more accessible to all Americans.