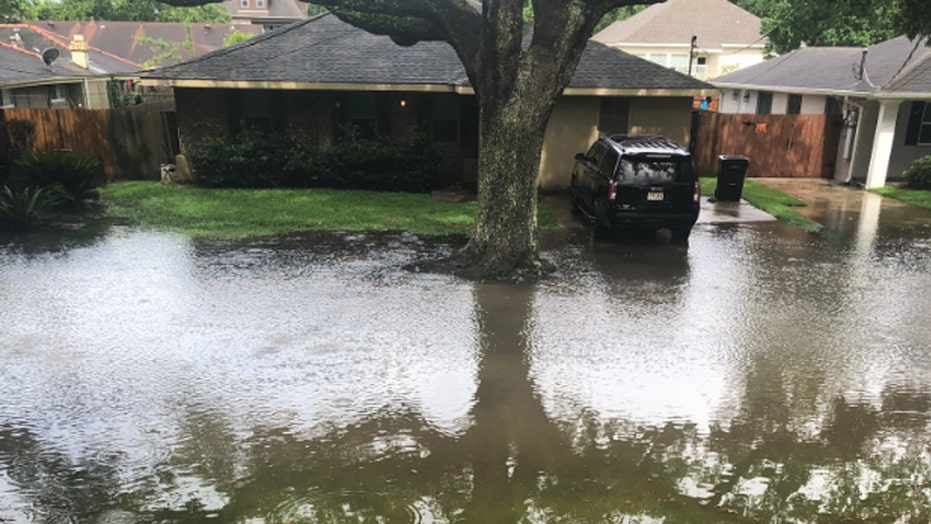 A batch of slow-moving thunderstorms Wednesday caused flash flooding around New Orleans -- a problem made worse by a city drainage system issue.

The National Weather Service (NWS) said between 4 to 6 inches of rain fell in portions of the city in a few hours Wednesday morning, causing water to quickly cover streets. Flash flood warnings were issued.

At one point, a city website for mapping flooding showed more than 100 streets in the Big Easy affected by the slow-moving storms, according to NOLA.com.

Significant street flooding was reported in New Orleans on Wednesday as thunderstorms brought heavy rains to the city. (NOLAReady/Twitter)

Neighborhoods such as the Garden District and areas near Canal Street saw high water and stalled out vehicles.

Some residents reported kayakers on city streets that had turned into canals.

Lenee Crowley shared a video to Twitter on Wednesday of her husband rowing a neighbor in their canoe to a nearby home on General Haig Street.

In a conversation with Crowley, the woman in the canoe said she "desperately" needed documents notarized for a proposal for a community mass feeding initiative, and that thanks to Crowley and her husband, the documents were ready “just in the nick of time.”

The flooding in New Orleans also prompted the closure of a section of interstate. A portion of westbound Interstate 610 in New Orleans was shut down due to high water.

Video showed drivers getting stuck as they passed through barricades.

In a news conference on Wednesday afternoon, the Sewerage & Water Board of New Orleans said the flash flooding was an "unforecasted event." By the time a warning had been issued, more than 3 inches of rain had fallen.

Officials said the city’s drainage system could not keep up with the rainfall in such a short period of time.

But S&WB Executive Director Ghassan Korban said another problem arose when a critical piece of power-generating equipment for pumps tripped offline. Pumps were operational, but at 8:52 a.m. the major generator, Turbine 4, went down.

"The loss of T4 slowed our ability to drain the city, but the street flooding had already begun. According to the Real-Time Crime Camera Center cameras, we have significant evidence of street flooding before the incident of T4 occurring,” he told reporters.

The technical problem took about two hours to fix, according to FOX8.

While officials said they are investigating why the turbine went down, Korban said that the amount of rain that fell in a short period of time still would have caused major flooding.

"The amount of rain that came down all at once overrun the system and with T4 tripping or not tripping, I truly believe, and we will quantify that, that the street flooding would occur anyway,” he said.

The New Orleans City Council will meet on Thursday to discuss the flooding and pump-related issues, FOX8 reported.