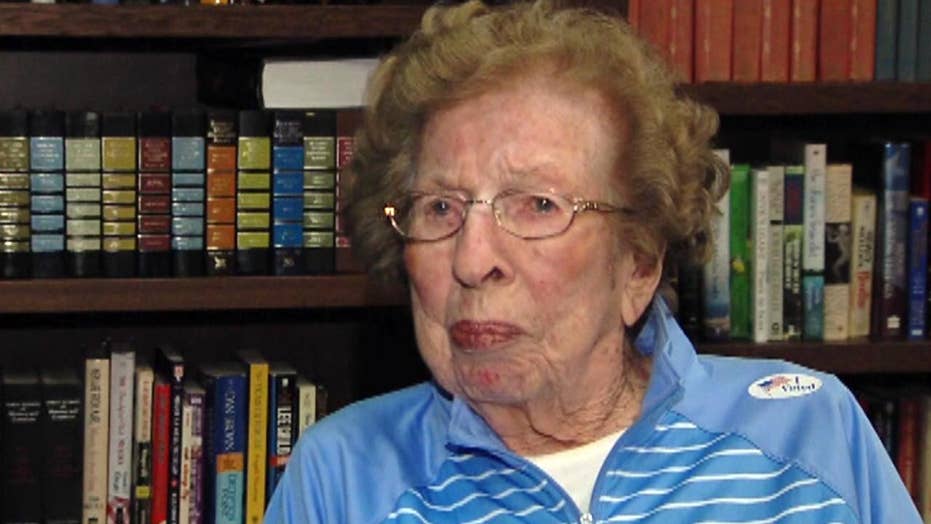 99-year-old Jean Pogue speaks about her passion for voting

Jean Pogue: 'I always think about it when I vote, how proud I am to be able to do it.'

Whatever you do, don't tell 99-year-old Jean Pogue your vote doesn't count.

The retired math teacher, who was born in 1918 -- two years before women were granted the right to vote, said there is no excuse for registered voters to sit out any election.

"One of the few duties that you really have as a citizen," Pogue said. "People have worked too hard in this country to get the right to vote for people not to treasure it and carry on the system as best they can."

The Roseville, Calif. resident, who turns 100 this month, told FOX40 on Monday her passion for equal rights has driven her to make sure to head out to her polling location over the years.

"You get to go to one of those little booths and you look at that fancy ballot," she said. "And I'm usually smiling when I'm doing it because I get to vote."

COMPLETE COVERAGE OF THE 2018 MIDTERM ELECTIONS

For the 2018 midterm elections Pogue opted to instead mail in her ballot.

She insisted people who believe their vote doesn't matter should think again.

Jean Pogue, who turns 100 this month, says she likes going to vote because, "you get to go to one of those little booths and you look at that fancy ballot." (FOX40)

"Every time someone has said that to me I'm almost ready to blow my top," Pogue told FOX40. "Then I have to give them an arithmetic lesson. [Votes] all add up to a total and you need every one of those that you can."

Pogue is looking forward to celebrating her 100th birthday with her former students as part of a "whooping good time." But she also already has her eyes on the next election.

"Vote, for God sakes. Pardon my grammar," she said.