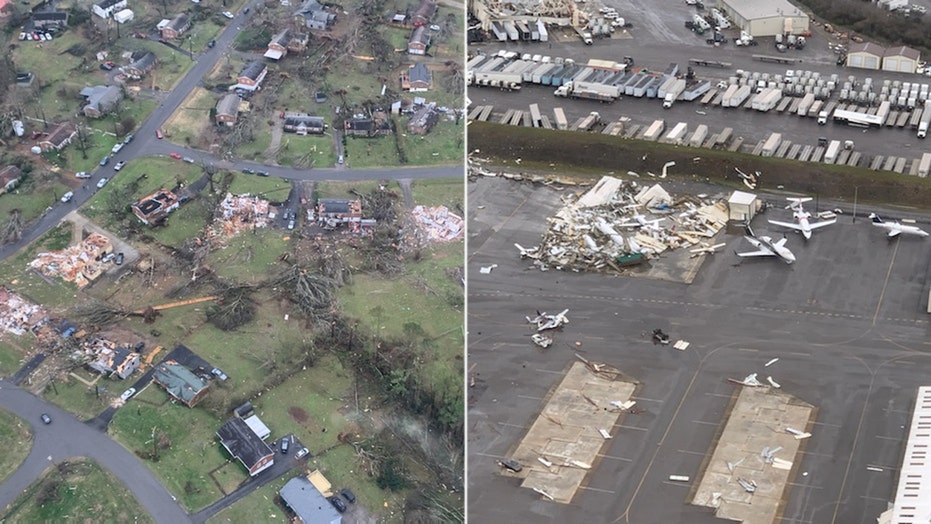 WATCH: A flyover of the massive destruction after a tornado hit the Nashville area. The tornado leaves several dead and many missing as severe weather strikes Tennessee.

As daylight broke across the greater Nashville area Tuesday, the devastation from a tornado that tore through parts of the city under the cover of darkness was revealed. At an airport, small jets were tossed. Power lines were down. Dozens of buildings had collapsed.

The death toll jumped to at least 22 people after tornadoes ripped across central Tennessee, and police and fire crews spent hours pulling survivors and bodies from wrecked buildings.

Several hangars were destroyed and power lines were down, she said, adding that there were no reported injuries there.

Gerlock said the Airport Authority has activated its Emergency Operations Center to coordinate response to the twister, and asked that the public avoid the airport.

The airport has been closed indefinitely. (WTVF via NNS)

Country star Dierks Bentley said he narrowly missed the tornado in Nashville as he flew into John C. Tune Monday night. He tweeted that he landed at the airport around 11:30 p.m.

"Glad we landed when we did. Wouldn’t have been good an hour later," Bentley tweeted. "It was the cell that turned into the tornado."

In addition to devastation at the airport, fallen walls and roofs, snapped power lines and huge broken trees left city streets in gridlock.

Debris could be seen littering streets, and several businesses were destroyed.

Schools, courts, transit line and the state Capitol were closed, and some damaged polling stations had to be relocated hours before Super Tuesday voting began.

Collapsed buildings were reported around Nashville after the tornado. (WTVF via NNS)

Metro Nashville police officers and fire crews were responding to about 48 building collapses around the city.

At least 19 people have been killed in the severe weather across central Tennessee. (WTVF via NNS)

According to Fox News Senior Meteorologist Janice Dean, forecasters believe the tornado that struck Nashville's "heavily-populated area" was estimated to be an EF-3. EF-3s have wind between 136 and 165 mph, and create "severe" damage," according to the National Oceanic and Atmospheric Administration's Storm Prediction Center.

The Tennessee Department of Correction also shared photos of the damage to the historic Tennessee State Prison.

The historic Germantown neighborhood in Nashville sustained some of the greatest damage along with East Nashville, two of the city's trendiest neighborhoods.

Damaged homes can be seen in one Nashville neighborhood on Tuesday. (WTVF via NNS)

Daylight revealed that roofs had been torn off apartment buildings, large trees were uprooted and debris littered many sidewalks. Walls were toppled, exposing living rooms and kitchens in damaged homes. Mangled power lines and broken trees came to rest on cars, streets, and piles of rubble.

“It is heartbreaking," said Gov. Bill Lee. "We have had loss of life all across the state." 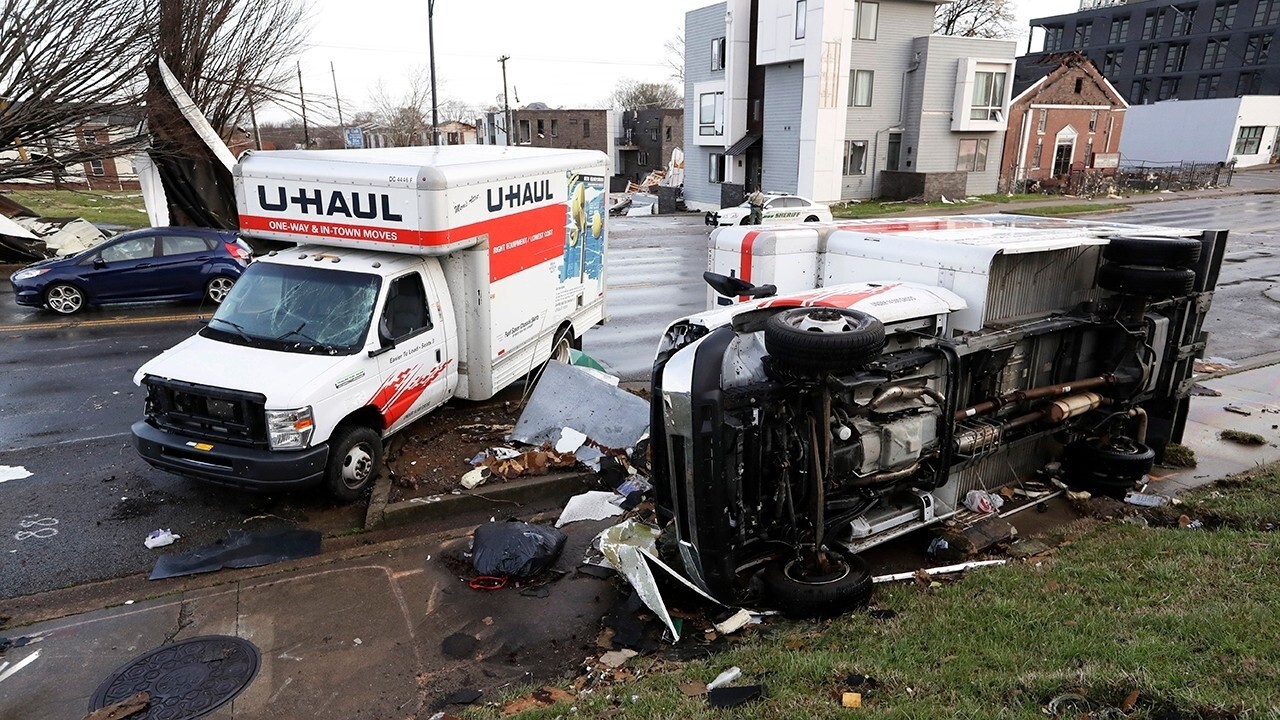 The tornadoes were spawned by a line of severe storms that stretched from near Montgomery, Alabama, into western Pennsylvania.

One tornado touched down near downtown and reportedly stayed on the ground for about 10 miles, heading into Nashville's eastern suburbs, following a path parallel to Interstate 40 and causing more damage in Mt. Juliet, Lebanon, Hermitage, and other communities.

President Trump said he'd visit the area Friday. "We send our love and our prayers of the nation to every family that was affected," he said. “We will get there, and we will recover, and we will rebuild, and we will help them.”