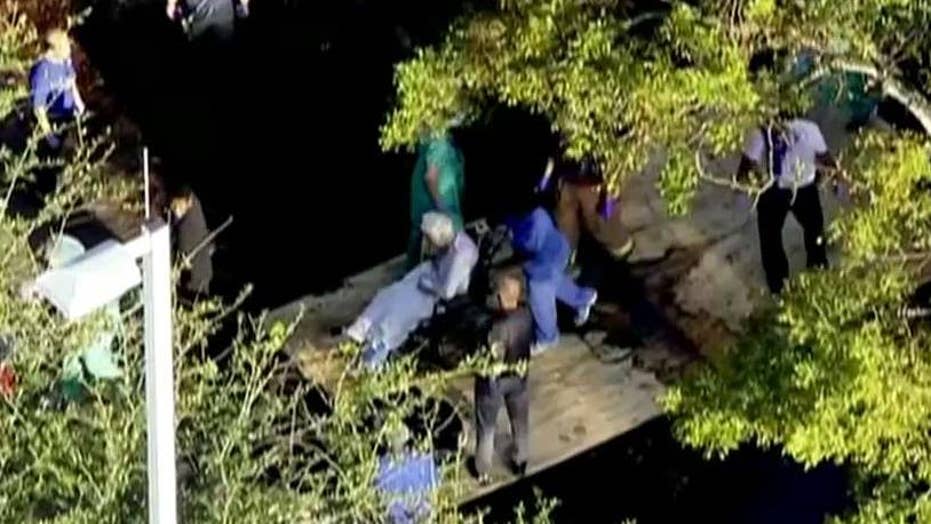 5 dead, 120 evacuated from facility due to intense heat after Irma knocks out power

A video shot by a resident’s daughter and viewed by the Miami Herald reportedly shows the dire conditions inside a Hollywood, Fla., nursing home where eight residents died after Hurricane Irma knocked out power at the facility.

On Thursday, detectives were at the Rehabilitation Center at Hollywood Hills after obtaining a search warrant to investigate the eight patients’ deaths, which police believed were heat-related.

The center said the hurricane knocked out a transformer that powered the air conditioning.

Broward County officials said the home reported the outage Tuesday, but when asked if it had any medical needs or emergencies, it did not request help.

But by early Wednesday, the center had placed three calls to report patients in distress, prompting firefighters to search the facility. They found three people dead and evacuated 145 people to hospitals, many on stretchers or in wheelchairs, authorities said. By that afternoon, five more had died.

“The first thing they should have done is get these patients the hell out of there,” Ray Nazario, a retired homicide detective, said. “This is criminal negligence. Someone should go to jail for this.”

The facility’s administrator, Jorge Carballo, said in a statement that it was cooperating fully with authorities.

Florida Gov. Rick Scott announced Thursday night that he has directed the Agency for Health Care Administration to terminate the center as a Medicaid provider. The program provides health care for low-income individuals and families.

Reached by phone Thursday, Rosemary Cooper, a licensed practical nurse at the rehabilitation center, declined to discuss specifics about the case, citing the ongoing investigation.

“The people who were working there worked hard to make a good outcome for our patients,” she said. “We cared for them like family.”

But state records revealed a variety of problems at the center. The center showed deficiencies in maintaining fire and safety standards pertaining to exits and storage areas, as well as more serious problems with its generator maintenance and testing, according to February 2016 reports by Florida Agency for Health Care Administration inspectors.

The ex-husband of 71-year-old victim Gail Nova said her devastated family believes the facility should lose its license.

“Someone’s got to answer for this. Someone let the ball drop very, very far,” Kenneth Nova said by phone from his home in Winter Haven.