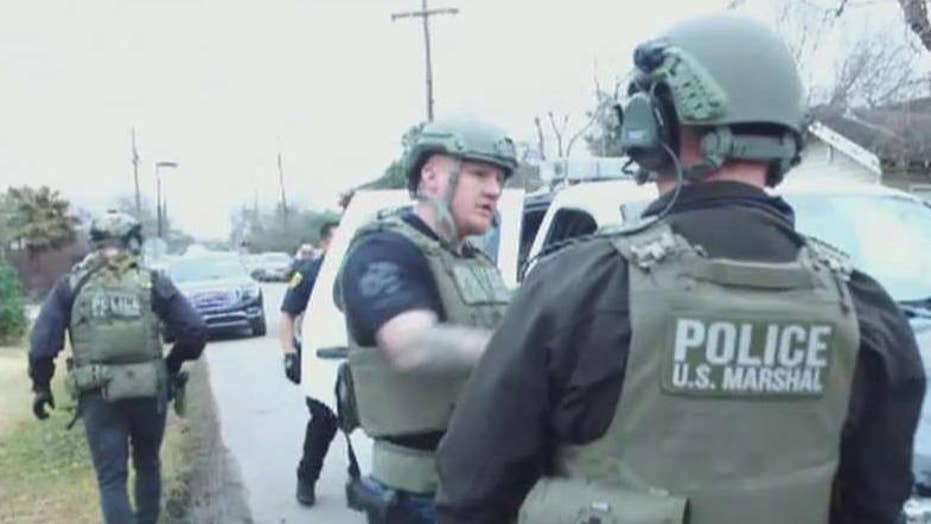 US Marshals crack down on MS-13, violent gangs

U.S. Marshals hunt for criminals at the southern borders. Gillian Turner gets an inside look at 'Operation Triple Beam.'

A member of the notorious MS-13 street gang known as "Animal," who admitted to the 2015 killing of a teenage boy in Massachusetts, was sentenced to 40 years in prison, officials said Tuesday.

The U.S. Attorney's Office in Massachusetts announced that 23-year-old Joel Martinez, who went by the street name of "Animal," will be subject to deportation once he's released from federal prison.

Martinez pleaded guilty in December to RICO conspiracy and admitting to stabbing 15-year-old Irvin Javier de Paz Castro to death on Sept. 20, 2015, according to prosecutors.

Joel Martinez, known as "Animal," admitted to the fatal stabbing of a 15-year-old in 2015. (US Attorney's Office/Operation Mean Streets)

President Trump, who has made the fight against the street gang a notable part of his domestic policy, recently referred to dangerous MS-13 gang members as “animals," which some media organizations took out of context to make it appear that he was talking about illegal immigrants.

The president was asked last week about the brutal gang by Fresno County Sheriff Margaret Mims when addressing California sanctuary city laws. Mims specifically said, “There could be an MS-13 gang member I know about, if they don’t reach a certain threshold, I cannot tell ICE about them.”

The U.S. Attorney's Office said that Martinez was secretly recorded by a cooperating witness where he acknowledged being a member of MS-13 and admitting his role in the killing. The video, posted by the Boston Globe, shows the informant coaxing the confession out of Martinez.

"I stabbed the culero three times," the 23-year-old said in the recording, according to the U.S. Attorney's Office, "He stared at me and he asked me if I was going to, if I was going to stab him. I told him, 'Yes, the Mara rules you.'"

“Mara” refers to Mara Salvatrucha, the long-form name for MS-13.

After the 2015 murder, prosecutors said that Martinez was "jumped in" and made a "homeboy," or full member of MS-13's Eastside Loco Salvatrucha (ESLS) clique in East Boston during a ceremony that was surreptitiously recorded by agents.

MS-13 more important to the Left than law-abiding citizens?

Why is the Left defending criminals like MS-13 against 'animal' charges? Why can't they call an animal an 'animal'?

When a prospective member is "jumped in," members of the MS-13 clique beat then new member with their hands and feet while one of the leaders of the clique counts aloud slowly to thirteen, according to prosecutors.

The kicking and countdown can be hear in video of the beating obtained by WBUR and posted to YouTube.

Last week, Martinez's lawyer requested his client receive 30 years in prison because he was forced to join the gang under duress, according to the Boston Globe.

“In order to survive within MS-13 it is vital to brag and puff oneself up,” Peter L. Ettenberg wrote. “Many of the other defendants did the same. The defendant’s ‘braggadocio’ is just that. ... It is counsel’s belief that Joel Martinez was the sacrifice to the threats of MS-13 towards his family that compelled him to join. If he did not join, family members would be killed.”

WHAT IS MS-13, THE VIOLENT GANG TRUMP VOWED TO TARGET

President Trump is set to visit New York's Long Island on Wednesday, another hotspot for MS-13 activity, and has spoken out about some of the grisliest murders committed by the gang in recent memory.

In the wake of his comments last week, media organizations continued to misrepresent Trump’s comments long after watchdogs called them out on social media for misinterpreting the remarks.

C-SPAN tweeted a video that did not show Mims’ comment, editing down the conversation with Trump’s answer and the caption: “President Trump during California #SanctuaryCities Roundtable: ‘These aren't people. These are animals.’” The misleading video has been viewed more than 4.5 million times.

The New York Times, ABC News, NBC News, CBS News and CNN all followed with similar misleading tweets – with most of the deceptive content coming after it was well publicized that Trump was specifically referring to MS-13 gang members.

The New York Times, ABC News, NBC News, CBS News and CNN did not respond when asked by Fox News if Trump’s comments would be clarified.

The Associated Press has corrected a similar error.