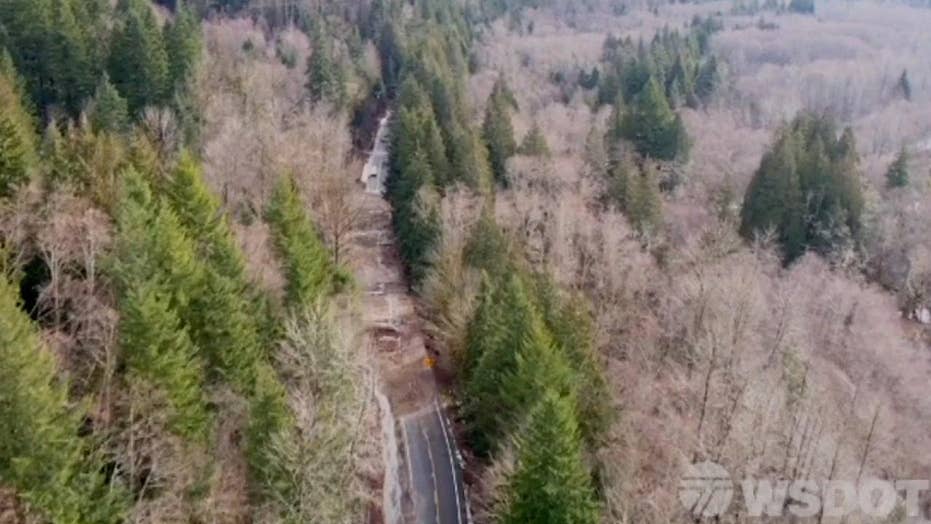 "Several buildings in Longmire have lost critical systems, as sump pumps have been unable to keep up with water intrusion," the park service said.

The Washington Department of Transportation said several days of "torrential rain" has closed State Route 706 east of Ashford, known as "the road to Paradise."

(Left: An overhead look at the origin of the landside above SR 706 near Mount Rainier National Park. Right: The second slide on SR 706 further east.)

The road, first closed at 4 a.m. on Feb. 6, now has large boulders, massive debris, and an "extremely unstable" hillside above, according to WSDOT. There's still no timeframe for reopening the road.

“We want to reopen the highway as soon as possible, but the slope continues to move and is very unstable,” WSDOT assistant region administrator Troy Cowan told Q13FOX. “Removing debris from the highway that’s up to 6 feet deep in places, plus strong ongoing running water may trigger additional slides that could put lives – both of crews and travelers –in danger.”

WSDOT said while the landslides are common in the region, the current slide on SR 706 is "much different and much more dangerous."

Debris blocks State Route 706 in Washington State at milepost 11.6 in Pierce County with no estimated time of reopening, according to the department of transportation. (Washington Department of Transportation)

Crews said the U.S. Forest Service road above the state highway collapsed in at least two places before debris wound up on SR 706. The state highway now "resembles a creek bed," according to the agency.

The closure blocks access to the Mount Rainier National Park’s Nisqually entrance, with no detour available. WSDOT is strongly encouraging residents to stay away due to the unstable hillside.

Park rangers on Monday escorted a convoy of drivers from a community located near the landslide to get supplies, due to the unstable conditions on the remaining back road -- now the only access to their homes.

In another part of the state closer to Seattle, residents of about 56 homes were advised to evacuate Monday due to landslide danger that could cut off part of their community.

King County Emergency Management sent out reverse 911 calls at 2:30 p.m. Monday to residents who were urged to evacuate an area near Fall City off of State Route 202, located about 25 miles east of downtown Seattle, Q13 FOX reported.

Officials said on Twitter they feared a landslide could damage the road. Anyone who lives on the other side of the landslide would then be forced to shelter in place until it could be cleared.

"King County will have a soils expert on scene Tuesday to evaluate next steps. There is no estimate for when the land movement may stabilize," county officials tweeted. "For residents who choose not to leave, they may be isolated for an extended period with no way in or out."