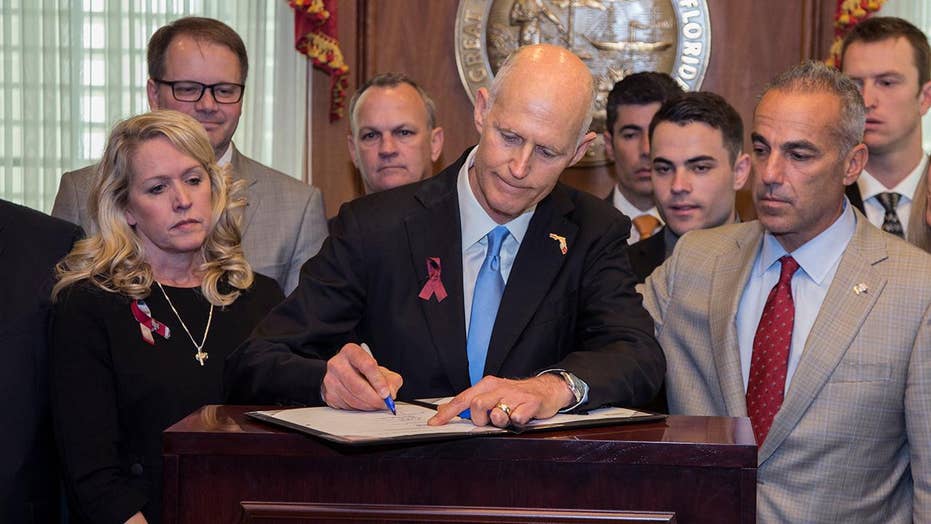 Governor Rick Scott signed Florida bill into law that raises the minimum age for buying rifles and allows some school employees to be armed; Garrett Tenney reports on the NRA's response.

Hundreds of gun owners in Florida have been ordered to give up their guns under a new law that took effect after the deadly Parkland shooting in February, according to a report published Monday.

The Risk Protection Order, signed by Florida Gov. Rick Scott just three weeks after a gunman killed 17 people at Stoneman Douglas, aims to temporarily remove weapons from gun owners who have been deemed by a judge to possibly be a threat to themselves or others.

Roughly 200 firearms have been confiscated in the state since the law was enacted, Sgt. Jason Schmittendorf, of the Pinellas County Sheriff's Office, told WFTS-TV. "Around 30,000 rounds of ammunition" were also taken, he said.

"It’s a constitutional right to bear arms and when you are asking the court to deprive somebody of that right we need to make sure we are making good decisions, right decisions and the circumstances warrant it,” Pinellas County Sheriff Bob Gualtieri told the station in defense of the task force.

Every petition filed under the order in Pinellas County has so far been granted by the judge, according to the report.

The first gun seizure under the law occurred in April when Florida authorities confiscated an AR-15 semiautomatic rifle from an Army veteran.

Jerron Smith's gun was seized when he refused to surrender it voluntarily, the Broward County Sheriff's Office said at the time. The officers also seized a .22 caliber rifle he owned, hundreds of rounds of ammunition, a bump stock and numerous other weapon-related items.

In addition to confiscating guns, the law also raised the age to buy a rifle to 21 and established a three-day waiting period on gun purchases.