Evelyn Rodriguez, whose 16-year-old daughter was murdered by a MS-13 gang member, speaks out on President Trump's acknowledgement of her loss during his State of the Union address.

The mom of a teenage girl murdered on Long Island by MS-13 gang members praised President Trump’s recognition of her and other victims’ families, saying she had "no words" for Trump's televised nod during the State of the Union address.

Evelyn Rodriguez, the mother of Kayla Cuevas, who was beaten and dumped in a wooded area of Long Island in September 2016, told FOX5 NY she was speechless when Trump honored her and the parents of Nisa Mickens, Cuevas’ 15-year-old best friend who was also killed by the vicious gang.

"Everyone in America is grieving for you," Trump said during the Tuesday speech. “…I want you to know that 320 million hearts are right now breaking for you. We love you. Thank you.”

Rodriguez told FOX5 about the moment: "When he said that, there were no words.” 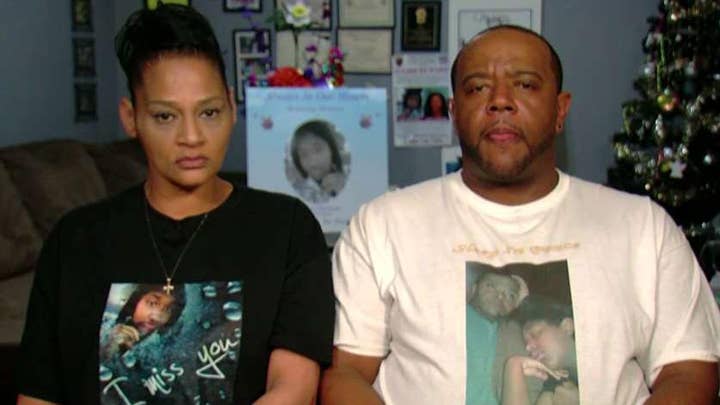 Rodriguez said she met Trump last summer when the president was on Long Island, where MS-13 members have particularly been wreaking havoc, to speak about gang violence in the U.S. During a brief conversation, the mother said Trump told her “we will speak soon.”

"I guess 'soon' was this week,” referring to the State of the Union.

Rodriguez and Kayla's dad, Freddy Cuevas, along with Mickens' parents, Elizabeth Alvarado and Robert Mickens, traveled to Washington D.C. for the address. Rodriguez also described a “positive” conversation she had with Trump.

“He was very sincere,” Rodriguez said. “Me talking with him. You can see and hear in his voice that he does care.”

She continued, as tears streamed down her face: “It’s painful to lose a child to gang violence. For another mother or father to go through this — they shouldn’t.”

Trump on Tuesday spoke about the night Cuevas and Mickens were murdered.

“Kayla Cuevas and Nisa Mickens -- were close friends on Long Island. But in September 2016, on the eve of Nisa's 16th Birthday -- such a happy time it should have been -- neither of them came home. These two precious girls were brutally murdered while walking together in their hometown,” Trump said.

Mickens’ family said at the time of the murder they believed MS-13 members attempted to kidnap Cuevas, but the 15-year-old Mickens attempted to fight the gang members off, PIX11 reported. Mickens’ was killed and her body was left on the side of the road.

Six “savage” MS-13 members were arrested and charged in Cuevas and Mickens’ murders.

Rodriguez said she will continue to fight against gang violence to prevent future tragedies.

"I can feel [my daughter’s] presence," Rodriguez said through tears. "And I can hear her say, 'Mom, keep up the fight.'"