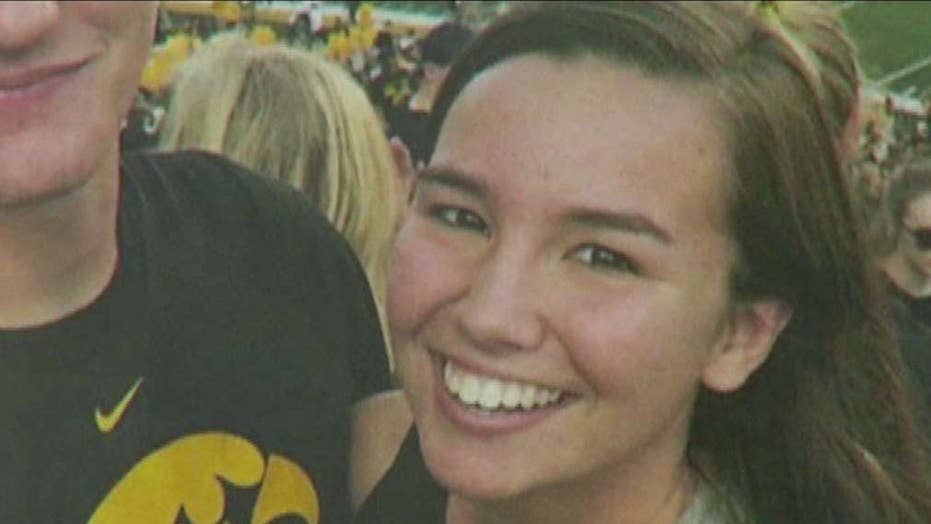 Tibbetts's boyfriend says his family is worried about how the public has 'demonized' him. Eric Shawn reports.

BROOKLYN, Iowa – Residents of the Iowa town where Mollie Tibbetts vanished told Fox News on Wednesday they're still trying to come to grips with the dramatic case as police hunt for the student who was last seen on July 18.

Julie Weiss, an employee at BGM, the local K-12 school, said her son graduated with Mollie and that they were casual friends. According to Weiss, her son was in “total shock” when he found out. “It’s just unbelievable that something like that could happen here, in a small town where everybody knows everybody.”

“She was a very good student and very well-liked by all her classmates... Just well respected.”

Weiss was a part of the original search party. She said they broke up into groups of five to seven and searched country roads, ditches, backyards and garages of folks in town.

She also spoke about Mollie’s boyfriend, Dalton Jack. “I mean, nice family. I don’t know them real well but I see them at the school. Nothing that I would have ever have suspected him of anything. I think he’s just in as much shock as anybody.”

Jack, whom police have cleared as a possible suspect, told Fox News in an exclusive interview earlier Wednesday that the last time he spoke to his girlfriend was on July 17 before he left town for work.

"I left for Dubuque, Iowa, which is about 100 miles away, on Tuesday morning at 5 in the morning," he said. "And I was staying there for work until what was supposed to be Friday. And then Thursday after we found out she was missing I drove home. So I was in Dubuque the entire time."

He also said that early on in the search for Mollie, he kept calling her missing phone, hoping anyone would pick up.

"I did for like the first week and a half. Not more recently. I was just trying to see literally if anybody would pick up. And then, yeah, straight to voicemail," he said.

A pig farmer said seven FBI investigators arrived at his home last Friday and asked to search it without a warrant. They were there for nearly two hours, taking photos of the interior of the home and also searching his garage. He said investigators then asked to interview him off the property and kept his cell phone overnight to check his records. The farmer has not been charged with a crime and said he “has nothing to hide.”

A bartender in Brooklyn, Jamie Manatt, recalled how it was especially “quiet” the night Tibbetts was last seen. She said the FBI later came to her home and questioned whether there were any “unusual” people in the bar that night.

“Usually when people come from out of state, this is where they stop,” Manatt said. “But there were no out-of-town people here in this bar that night.”

Manatt said she left the bar at around midnight that night and noticed that the True Value hardware store nearby had been vandalized. She said she alerted a deputy who then canvassed the area for the vandal but “it was very quiet. Not many people were out.”

Fox News has confirmed that police have taken copies of all surveillance tapes associated with Mollie's disappearance from Casey’s General Store.

Mollie was last seen on July 18 when she left her boyfriend’s home to jog. The boyfriend shares the home with his brother and his fiance, and Tibbetts was staying there to watch his dogs while he was out of town on business.