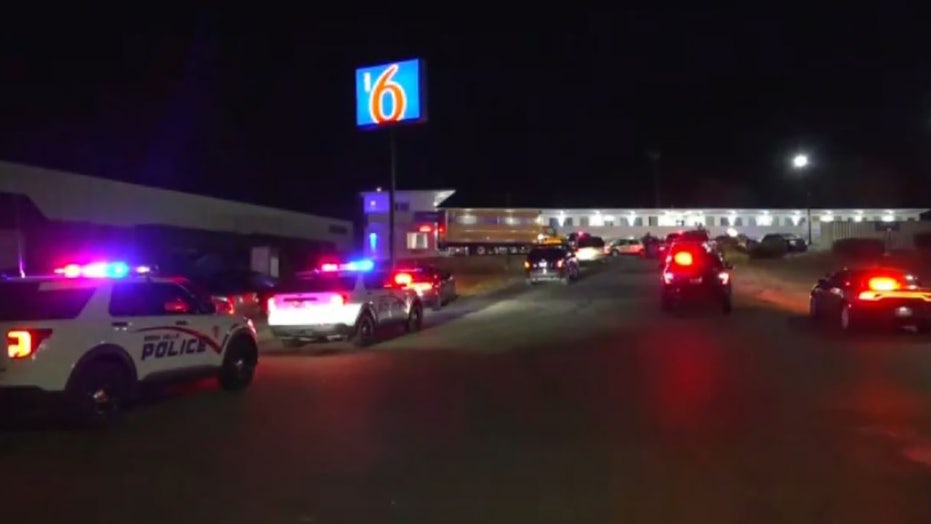 A Missouri police officer was killed early Thursday in a motel shootout that left another officer wounded and a gunman dead, authorities said.

A Bonne Terre police officer was killed and another wounded in a shootout at a Motel 6 early Thursday that also left a gunman dead, authorities said. (FOX2 St. Louis KTVI)

As the officers approached a room where the disturbance was reported, a man later identified as James Emory came out and opened fire, striking both officers, FOX2 St. Louis reported. The officers returned fire, killing Emory.

"Being a smaller town, a smaller police department, this is going to hit hard in their community for the days to come," Thompson told the station.

The wounded officer was identified as 28-year-old Garrett Worley, the station reported. He was shot in a leg and airlifted to St. Louis Hospital, where he underwent surgery. He is a 7-year member of the police force.

Police identified the officer killed as Lane Burns. He was rushed to a hospital in critical condition after being shot multiple times, but later died of his injuries.

The officer killed, described as in his early 30s, served as an officer for about five years, authorities said. (FOX2 St. Louis KTVI)

Burns, who was in his early 30s, had served on the force for about five years. He is survived by his fiancé, Shannon Chasteen, and a 9-year-old daughter.

"He loved what he did and he loved the department that he worked for," Chasteen told KFVS-TV. "From what I’ve been told by the hospital and other officers, he went down with a fight."

No further details about the shootout or the nature of the disturbance call were immediately given.

The Missouri Highway Patrol is continuing to investigate the incident.

Bonne Terre is located about 50 miles southwest of St. Louis.