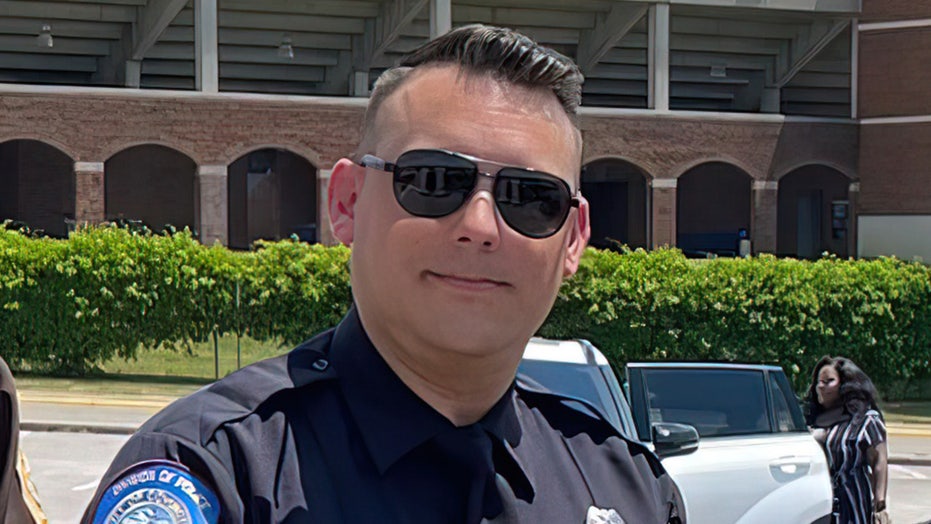 A Virginia police officer was shot and killed Monday at a gas station where he was responding to a "domestic situation" between two relatives, authorities said.

Covington Police Officer Caleb Ogilvie, 35, was killed in a shootout with the suspect at the city’s Farm and Fuel gas station and convenience store around 4:30 p.m., Covington Police Chief Christopher Smith said.

It was the department’s first on-duty shooting death of an officer, the chief said.

Ogilvie was responding to the gas station after the suspect, later identified as 42-year-old Toney S. Poulston Jr., fatally shot his 64-year-old relative, Randall Lee Paxton, according to investigators with the Virginia State Police.

When officers arrived at the scene, they spotted Poulston armed with a pistol leaving the store, police said. During an exchange of gunfire, Ogilvie and Poulston were both killed.

Investigators didn’t immediately provide details of the dispute that lead to the shootings.

Ogilvie was killed in a shootout with the suspect, who also died in the gunfire, investigators said. (Virginia Association of Chiefs of Police)

"This loss while responding to a call is a first for Covington Police Department and something, quite frankly our community, nor I as Chief ever thought would happen here," Smith said in a written statement.

Ogilvie is survived by his wife, Natasha, and their two young daughters. He also leaves behind an ex-wife and their two children.

Ogilvie is a former Marine, serving active duty from 2006 to 2010. (Virginia Association of Chiefs of Police)

"The First Lady and I are devastated by the tragic loss of a Covington Police Officer," Youngkin tweeted Tuesday. "This serves as a reminder that law enforcement officers risk their lives every day."

Ogilvie completed the police academy training and joined the Covington Police Department in 2021.

"His engaging personality, dedication to serving others, and great sense of humor quickly endeared him to his Covington Police family and our community," Smith said. "This senseless loss is being felt by so many today and will be in the days to come."