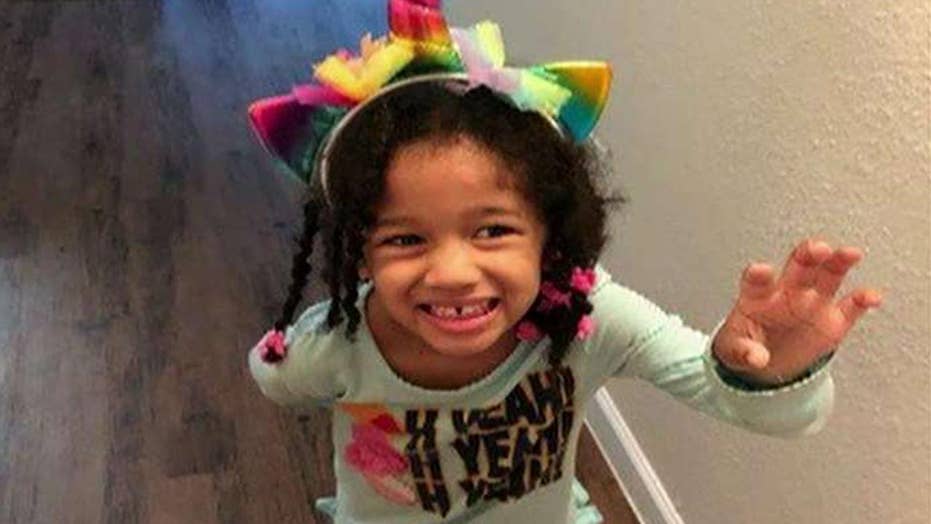 The search for Maleah Davis intensifies as new reports surface that she had recently been returned home by child protective services following abuse allegations.

As desperate searchers combed the landscape Tuesday in a wooded area of a Northeast Houston neighborhood where a man told investigators his 4-year-old stepdaughter was abducted last Friday by three men in a pickup truck, police revealed he's now a "person of interest" in her disappearance.

The Houston Police Department told Fox 26 that Darion Vence is now a "person of interest," after claiming that Maleah Davis was kidnapped by the men after he was beaten unconscious but, eventually, he and his 2-year-old son were allowed to go free.

Initially, police said he told detectives that he walked to the hospital after being in and out of consciousness for almost 24 hours before reporting her missing. But then, officials from the Sugar Land Police Department -- which is helping Houston police with the investigation -- told Fox 26 Tuesday afternoon that Vence said he was dropped off, making his story inconsistent.

Authorities in Houston are searching for Maleah Davis, 4, who may have been abducted. (Houston Police Department)

Investigators initially said they were not considering Vence a suspect, even releasing a photo of him on Twitter that showed an injury to his forehead.

"I realize there's a lot of blanks in that story, but we're hoping the public can fill in the blanks," Sgt. Mark Holbrook said at a news conference on Sunday.

Volunteers from Texas EquuSearch searched the woods and grass near U.S. 59 and Greens Road on Monday for any evidence that could point to Davis' location.

Members of Texas EquuSearch conduct a search for four-year-old Maleah Davis Monday, May 6, 2019, in Humble, Texas. (Godofredo A. V squez/Houston Chronicle via AP)

"We want to start checking every single dumpster just in case," Texas EquuSearch's Tim Miller told KTRK-TV. "We believe in miracles. Let's hope we get one."

Police said the 4-year-old girl has undergone brain surgeries that "needed a lot of care" and was sick this week.

Child Protective Services officials told KTRK-TV that Maleah was returned to her home in February --  about six months after she was removed last August from her home, when the agency investigated allegations of physical abuse related to a head injury she sustained. Brittany Bowens, Davis' mother, told the television station the injury was determined to have been caused by a fall, and that she is currently terrified for her daughter.

Bowens spoke out on Monday to reporters, making a plea  that she just wanted to "find my baby."

“Maleah is a sweet girl. She loves to dance. She’s always happy," she said Monday. "She’s very helpful…she has a beautiful spirit.”

Holbrook said the vehicle Vence was driving, a 2011 Nissan Altima, also was missing. He said a traffic camera showed it driving through an intersection in Sugar Land around 3 p.m. Saturday.

Maleah is described by police as having black hair and brown eyes, according to Fox 26. She is approximately 3-feet tall and weighs 30-40 pounds, and was last seen wearing a light blue Under Armor jacket, blue jeans and a gray Under Armor tennis shoes with pink and white details.

Detectives were asking anyone who saw Darion or Maleah between 9 p.m. on Friday and 6 p.m. on Saturday to contact HPD Homicide or Crime Stoppers.