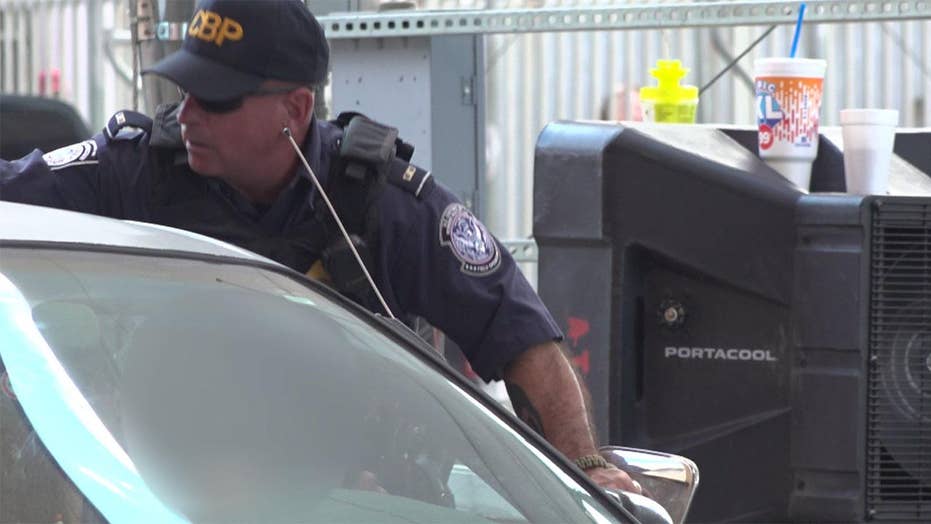 Methamphetamine seizures at the border at 'historically high levels'

There are now more cartels in Mexico, making the market more competitive and the drug cheaper according to Stratfor

NOGALES, Ariz. -- Meth was once a drug mostly made in home labs in rural America.

But ask drug enforcement officers, and they'll tell you that Mexican cartels, have now cornered the market in meth production -- and the drug has quickly grown in popularity across the U.S.

In the past few years, drug agents say, Mexican drug cartels have ramped up production of a purer and cheaper form of meth. And it's now being smuggled into the U.S. through the border at record levels.

“Meth seizures have increased dramatically [by U.S. Customs and Border Protection] over the last four to five years,” said Pete Bidegain, Tucson Sector Border Patrol agent and special operations supervisor. “A lot of that is due to demand here in the U.S., and the Mexican cartels are now creating their own meth and then pushing it across the border through the channels that they use historically for cocaine and marijuana.”

Month after month, drug agents are intercepting large supplies of meth at the border. Scott Stewart, vice president of tactical analysis for Stratfor -- an American geopolitical intelligence platform and publisher -- said meth is coming into the U.S. at "historically high levels."

Meth seizures along the border increased 255-percent from over 8,400 kilograms in 2012 to 30,081 kilograms—that’s the weight of an average loaded cement truck—in 2017. (U.S. Customs and Border Protection)

“We are seeing very large seizures of methamphetamine being smuggled across the border into the U.S.," Stewart said.

Scott Stewart, a former Army tactical intelligence officer and special agent with the Department of State’s Diplomatic Security Service who is now at Stratfor, attributes this increase to an uptick of smaller cartels in Mexico “trying to make their share of the pie” so that’s driven up competition and made the drug cheaper.

Meth seizures along the border are up, way up, in recent years. (U.S. Customs and Border Protection)

“What we’re seeing in Mexico is that the meth they produce is very strong, very potent; it’s a lot better than the stuff that used to be produced in trailer parks in the U.S., so we have this cheap, strong drug coming into the U.S. that is making these cartels a lot of profits,” Stewart said.

There has also been an uptick in overdoses.  Indeed, deaths from psychostimulants, which includes meth, are rising, according to the Drug Enforcement Administration (DEA).

From 2010 to 2015, about 85 percent to 90 percent of the drug poisoning deaths reported under the psychostimulant header mentioned methamphetamine in the death certificate. According to the Centers for Disease Control and Prevention (CDC), in 2016 there were 7,542 psychostimulant drug poisoning deaths in the United States, representing a 32 percent increase from 2015 and a striking 387 percent increase since 2005.

Drugs like meth are being delivered via drone or other aircraft, in  liquid form disguised as cleaning solutions, in food, and even inside statues. (U.S. Customs and Border Protection)

“We've seen an increase in the number of deaths related to methamphetamine because of that … cross-contamination or cross-use with the fentanyl, which is also very strong and very cheap,” Stewart said.

Stewart said drug cartels have started focusing on meth because of its profitability.

“As long as Americans are willing to pay a lot of money for these poisons…people are going to find a way to manufacture them and feed that economic market,” Stewart said.

TEXAS MEN ARRESTED AFTER 2 KILOS OF CRYSTAL METH ARE FOUND IN VEHICLE: POLICE

The cartels are bringing the meth into the U.S. via drones or aircraft. But sometimes they get craftier still, bringing it in liquid forms disguised as cleaning fluids, in food items, and even in statues.

“They're really very inventive and very flexible in how they're smuggling it to try to get around all the checks that are being put in place at the border to try to stop it,” Stewart said.

U.S. drug czar Jim Carroll recently took a tour along the border with Border Patrol agents and customs officers to see how meth and other illegal drugs are being smuggled. Carroll doesn’t want meth to become the cornerstone of the next wave of addiction in the U.S. but is already seeing many communities affected by it.

“The drugs that are killing us are coming right here … and we're going to end it,” Carroll said. “We're going to secure the border. We’re going to have a strong wall and we are going to make sure that more Americans grow up and lead productive lives” (Fox News)

He said he wants to make sure that meth doesn't become the next drug crisis, like the opioid epidemic destroying lives all across the country. “The drugs that are killing us are coming right here … and we're going to end it,” Carroll said. “We're going to secure the border. We’re going to have a strong wall and we are going to make sure that more Americans grow up and lead productive lives.”