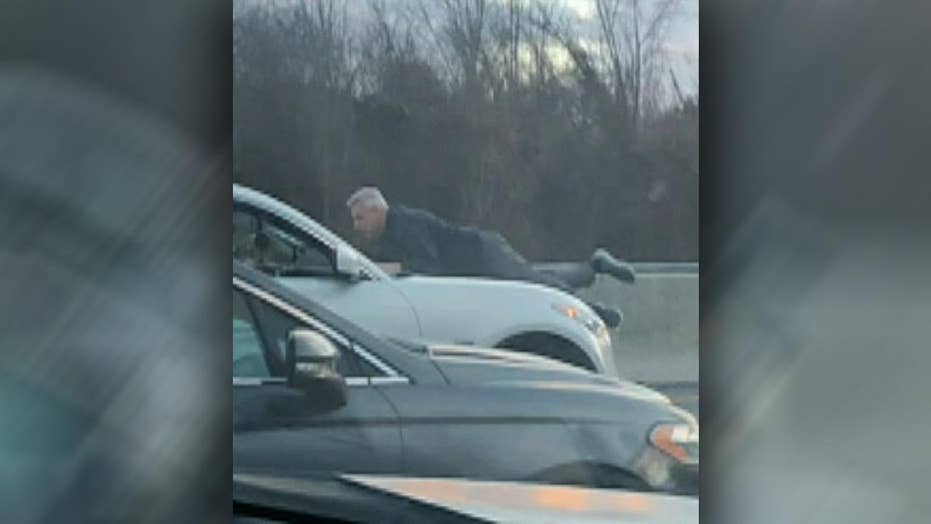 Raw video: Man holds on to hood of speeding car

A gun-wielding good Samaritan brought a harrowing road rage incident to a safe end, reportedly stopping a driver who'd been racing through Massachusetts -- with a 65-year-old man clinging to the hood of his SUV.

An unidentified person ordered Mark Fitzgerald, 37, at gunpoint out of his SUV, allowing Richard Kamrowski to climb down from the car unscathed, police said.

“The SUV driver ultimately came to a stop, we believe with the intervention of some good Samaritans, and was taken into custody by responding troopers,” Massachusetts State Police spokesman David Procopio said.

Investigators said Kamrowski and Fitzgerald had been exchanging insurance information after a minor sideswipe on I-90 Saturday afternoon when they started to argue.

The encounter escalated when Fitzgerald suddenly tried to drive away, and Kamrowski, who was in the path of the vehicle, jumped on the hood of the Infiniti, state troopers said.

“I thought he was going to run over me and, I don’t know, I don’t think he stopped, he just kept going fast then slow, fast then slow trying to get me to slide off, and I wasn’t getting off the car,” Kamrowski told Boston 25 News.

Police said Fitzgerald continued to drive for 2 to 3 miles, reaching speeds as high as 70 mph with Kamrowski clinging to the hood.

Alarmed drivers tried -- and failed -- to get Fitzgerald to stop before the gun-toting mystery person finally brought the SUV to a halt, troopers added.

Both men were expected to face a judge Monday.