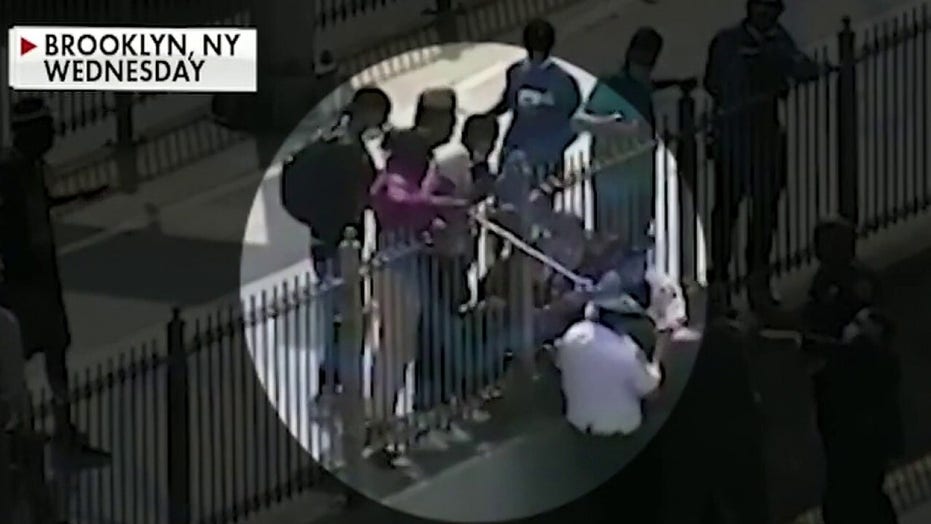 Four NYPD officers are injured during a confrontation with protesters on the Brooklyn Bridge near a unity march; Laura Ingle reports.

The Bronx man who allegedly punched NYPD Chief Terence Monahan and two other officers during protests on the Brooklyn Bridge Wednesday has been released without bail.

Quran Campbell, 25, is accused of socking the highest-ranking uniformed cop several times in the face as Monahan tried to arrest him after Campbell had allegedly punched another NYPD officer and lieutenant near the Manhattan approach to the bridge.

Campbell was arraigned on assault charges in Manhattan criminal court and was granted supervised release.

The NYC man who allegedly punched <a data-cke-saved-href="https://www.foxnews.com/category/us/crime/police-and-law-enforcement" href="https://www.foxnews.com/category/us/crime/police-and-law-enforcement" target="_blank">NYPD</a> Chief Terence Monahan and two other officers during protests on the Brooklyn Bridge Wednesday has been released without bail. (NYPD)

A second Bronx man, Banks Shaborn, 25, was also arraigned Thursday after allegedly clocking the same lieutenant, Richard Mack, of the department’s Strategic Response Group, multiple times in the face during the scuffle.

The suspects allegedly broke both of Mack’s orbital bones, sending him to the hospital for 12 stitches on his face after the melee. Monahan said he suffered some bruises and jammed fingers, but was otherwise fine.

Police said they recovered a Taser from Shaborn’s pocket and a folding knife from his shoe.

Shaborn, who faces assault and criminal possession charges, was held on $10,000 bail.

The bridge brawl broke out Wednesday morning when social justice protesters in Manhattan disrupted a pro-NYPD march as it sallied forth from Brooklyn over the Brooklyn Bridge.

Monahan on Thursday described the two as part of an “anarchist group that has been infiltrating this Black Lives movement since the beginning,” he said on “Good Day New York.”

“This is what we dealt with since the first protest after George Floyd,” he went on. “It is a legitimate movement, but it is being hijacked by these anarchists, and they are the ones that have been attacking our police officers [and] are out hiding behind the many, many peaceful protesters that are out there.”

The NYPD said 37 people were arrested in the mayhem, which came after days of pro-NYPD and counter-BLM protesters clashes in neighborhoods like Bay Ridge, Brooklyn, and Bayside, Queens.