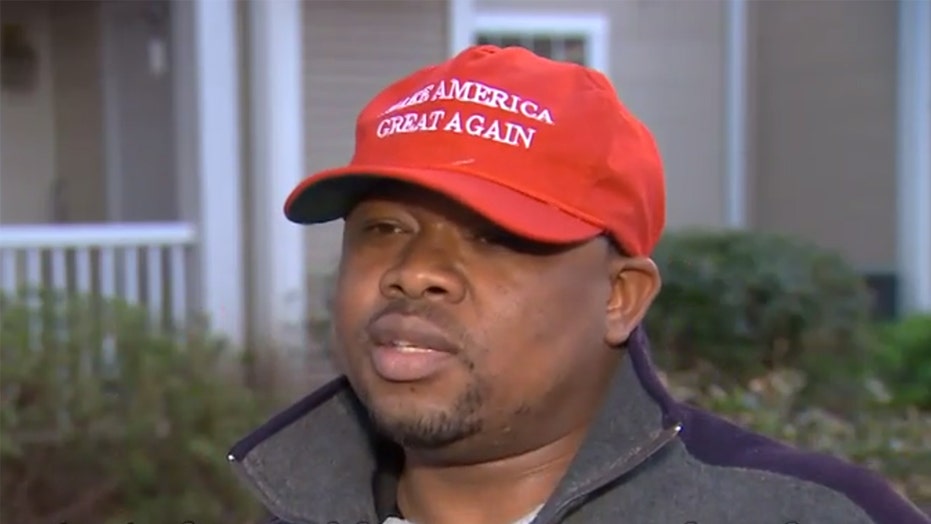 A pro-Trump immigrant from West Africa was pummeled and knocked to the ground over the weekend for wearing a “Make America Great Again” hat, Maryland police said.

Atsu Nable told FOX5 DC that he was the one in the MAGA hat. He said the two men approached him Saturday in Germantown, outraged he was wearing it. He said one of the men struck him from behind, leaving him shocked.

Nable told the station he was proud to wear the hat as a long-time supporter of President Trump. He said he became a naturalized U.S. citizen after emigrating from Togo in West Africa in 2007, attended Trump campaign events and served as a volunteer at Trump's inauguration.

Cops charged Jovan Crawford, 27, of Germantown, and Scott Duncan Roberson, 25, of D.C., with assaulting Nable. They were also charged with robbery, attempted theft and conspiracy.

Police said in a news release Nable initially tried to walk away from the two men. When they approached him, he reportedly said he was wearing the MAGA hat because “he was entitled to his own views.”

West African immigrant Atsu Nable said he asked his alleged assailants "why are you doing this?" He said they told him, "No, the hat." (Fox 5 DC)

The two men then began striking Nable and telling him to take the hat off, the news release says.

“The victim continued to be struck by the suspects until he fell to the ground,” cops said in the release. “The suspects then removed property from the victim, and destroyed items of value.”

Nable told FOX5 his assailants also destroyed his headphones and tried to steal his cellphone.

After witnesses called 911, officers found Crawford and Roberson attempting to hide among a group of children playing basketball, police said.