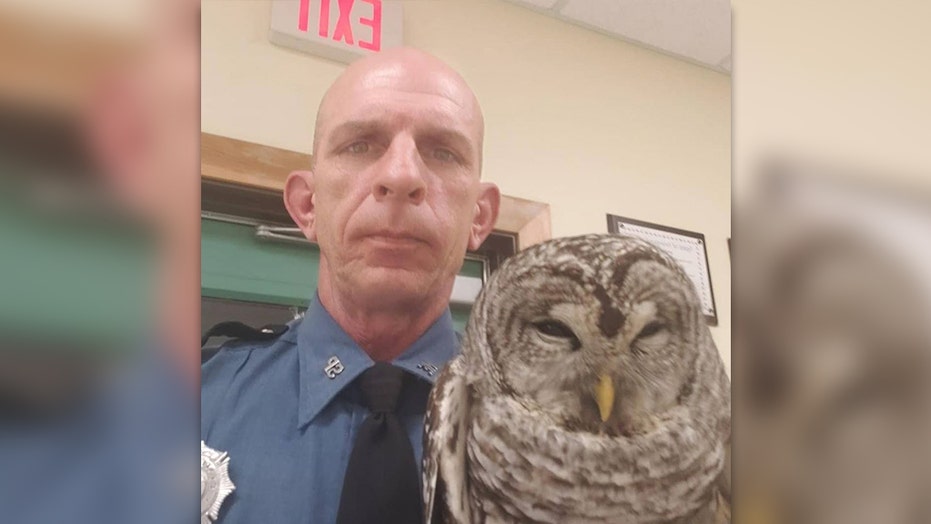 It was a tough night for one large owl but a hoot for a Maine state trooper, according to a report.

A car apparently struck the owl in Manchester, outside Augusta, Friday night, leaving it in a disoriented state in the middle of a busy road.

That’s where a trooper on patrol, Sam Tlumac, found it, WTHR-TV reported Tuesday.

An owl rode shotgun with a Maine state trooper after getting rescued from the middle of the road. (Maine State Police)

MASSACHUSETTS OWL SURVIVES AFTER BEING STRUCK BY CAR, TRAPPED IN GRILLE

“He took the subject to the Manchester Fire Department,” a post on the Maine State Police Facebook page read, referring to the trooper and the bird.

Trooper Sam Tlumac and the owl he spotted while on patrol. (Maine State Police)

Police posted a photo of the owl riding shotgun in Trooper Tlumac’s car.

“Tlumac had to bring a person to jail (unrelated to the owl) and upon his return he checked on the owl, and it seemed much better,” the post said. “He brought the bird outside. It took flight into nearby trees.”

The owl appeared disoriented in the middle of a busy road when the state trooper found it. (Maine State Police)

Comments on the Maine State Police Facebook page included one pointing out that the owl made out better than the person who went to jail.