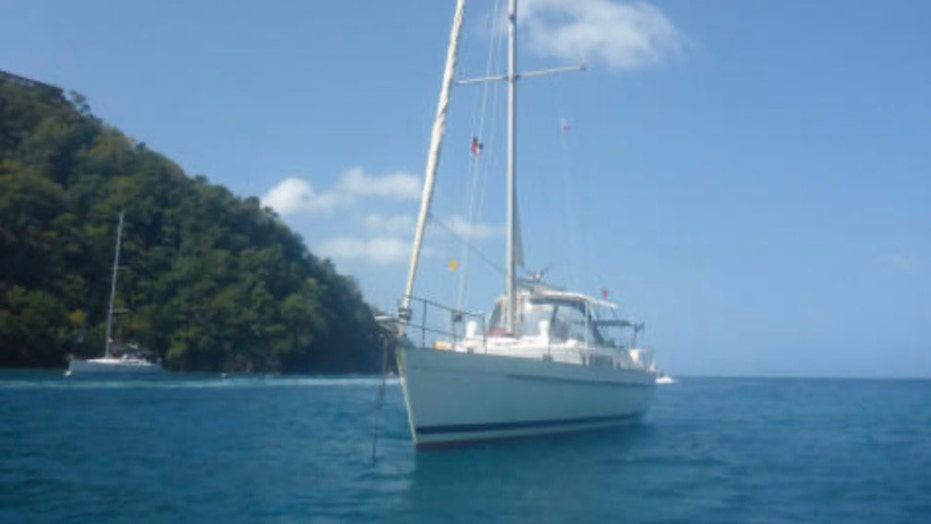 Three people on board a 40-foot sailboat that was reported missing over the weekend off the coast of Maine and sparked a massive search established communications with the U.S. Coast Guard on Monday and are continuing on their journey, officials said.

The U.S. Coast Guard had been searching since Saturday for Charlotte Kirby, Nathaniel Davis and Wilfredo Lombardo, who were aboard the 40-foot sailboat named Dove. The boat was last known to be about 20 miles south of Mount Desert Island, where the famed Acadia National Park and seaside hamlet town of Bar Harbor are located.

The Coast Guard said dispatchers on the mainland received a 911 call at about 3 a.m. from passengers on the boat that warned they were in distress. By Monday afternoon, the Coast Guard announced on Twitter that they established communications with the boat and confirmed those on board were not in distress.

A Coast Guard spokeswoman said rescuers were able to spot the boat's location and message the crew after a family member renewed a subscription for a GPS messaging device.

“With outstanding coordination and cooperation with the families, we were able to confirm their loved ones are not in distress and are continuing their journey south,” said Cmdr. Kelly Denning, search and rescue mission coordinator with the First Coast Guard District.

After the call was placed over the weekend, the Coast Guard said that rescue crews from Station Southwest Harbor, Air Station Cape Cod, and the Canadian Coast Guard responded to the area to assist.

Officials were searching for three days for three people who were on the 40-foot sailboat named Dove that reported trouble about 20 miles south of Mount Desert Island, Maine. (Twitter/USCGNortheast)

By Sunday, rescue aircrews had searched 2,700 square nautical miles for the boat with an HC-144 Ocean Sentry airplane from Air Station Cape Cod.

The Coast Guard had shared photos on Twitter of Charlotte Kirby and Nathaniel Davis as part of the search efforts.

But on Monday, Coast Guard Operations Unit Controller Chris Berry told the Portland Press Herald that one of the boaters made cellphone contact with a family member.

“They found themselves,” Berry said. “They started answering their phone. One of them called or texted their parents in reply to their parents’ texts and said they were fine, were off Montauk, and were continuing their trip south.”

Officials initially said that someone in the phone call asked for help, but Coast Guard spokeswoman Petty Officer Nicole Groll told the Press Herald on Monday that no one actually said the word "help" before the call cut out.

The Coast Guard had said three people were on board the 40-foot sailboat named Dove. (Twitter/USCGNortheast)

The sailboat's home port is John Williams Boat Company on Mount Desert Island, and the ship departed from the Somes Sound before the call was made. On Saturday, the area where rescuers were searching saw 5-foot seas with 20-knot winds, according to the Coast Guard. The air temperature hovered around 34 degrees, with a water temperature of 52 degrees.

Officials have not said what triggered the phone call to 911. Wilfredo Lombardo's mother, Anita Lombardo, told the newspaper her son was friends with Davis and they were headed for Florida, adding that the last few days have left then "a mess."

Lombardo's stepfather, Sam Holland, said they were "breathing again" but also felt some anger over whatever happened out at sea over the past few days.

“Now I’m mad. Now I want some answers," he told the Press Herald. "I want to know what the hell happened."