A previously convicted Kentucky man faces federal charges after he allegedly posted a video to Facebook Live holding a gun and saying he would shoot Lousiville police officers if someone paid him $30,000, officials recently announced.

Cortez Lamont Edwards, 29, on Wednesday posted the video, in which he showed the Louisville Metro Police Department responding to an unspecified crime scene in front of his home.

Edwards, who was livestreaming the video, was seen with an “AR variant pistol including a non-extendible support brace with an extended magazine” during the clip, in which he also said “he is requesting being paid $30,000.00 to shoot Louisville Metro Police Department (LMPD) officers on scene,” according to a Sunday press release by the U.S. Attorney’s Office in the Western District of Kentucky.

"Louisville needs healing and safety for its citizens, not armed felons seeking bids to shoot police," said U.S. Attorney Russell Coleman. "Federal law enforcement here will continue to respond as one to swiftly mitigate threats to our city."

When police and federal law enforcement showed up on Sunday to search Edwards’ home, they found him sleeping on his living room couch with a Glock 9mm semiautomatic pistol nearby, the DOJ said. Edwards was alone with a toddler at the time of his arrest, officials added. 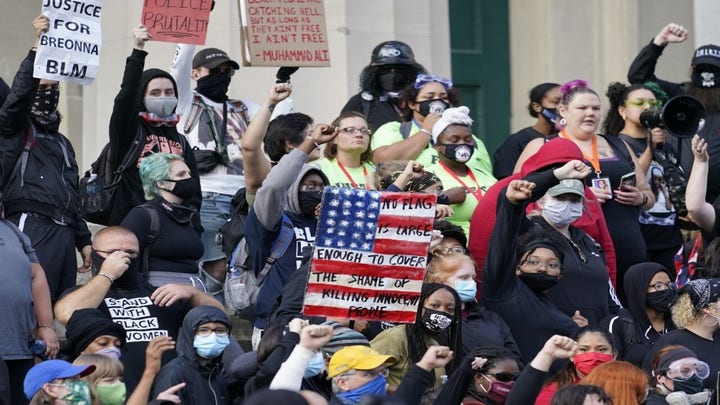 He was charged with being a felon in possession of a firearm and faces up to 10 years behind bars if convicted.

Many parts of Louisville have been overtaken by protests and, at times, violence and riots, in the wake of the grand jury's Wednesday decision to indict only one of three police officers involved in the fatal shooting of Breonna Taylor. None of the officers were charged with her murder.