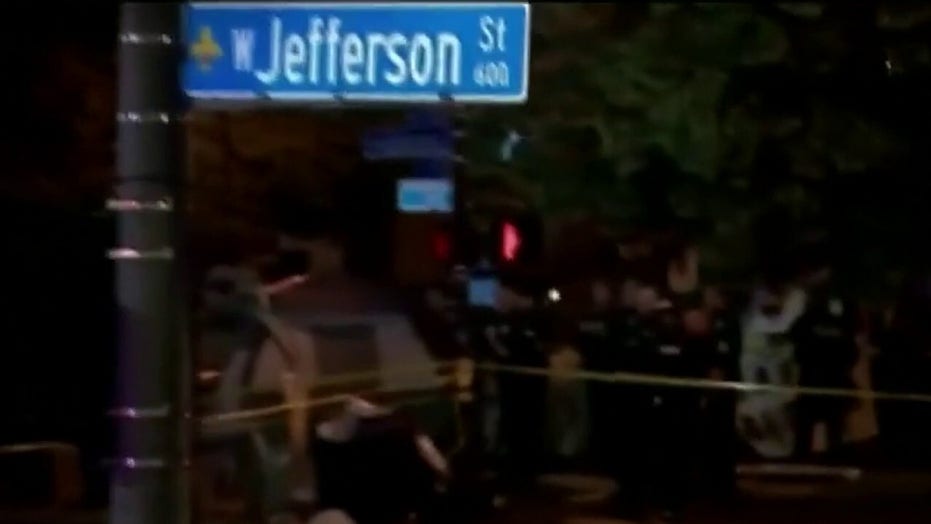 Authorities in Louisville, Kentucky were investigating after a suspect opened fire on a crowd of peaceful protesters at Jefferson Square Park.

A shocking video has emerged showing gunfire ringing out at a Louisville, Ky., protest demanding justice for Breonna Taylor Saturday that left one dead and another injured, as police revealed the suspected gunman was a fellow protester.

Tyler Charles Gerth, 27, of Louisville, died of a gunshot wound Saturday night, the Jefferson County coroner's office said. Police said the protester, later identified as Steven Lopez, was wounded in the incident and remained in custody at the hospital.

“The man had been participating in the protest since they began and had been arrested a couple of times over the past several weeks. He had been repeatedly asked by other members in the park to leave due to his disruptive behavior,” Louisville Assistant Chief of Police Robert Schroeder said. “In addition to this man, multiple other people in the park were armed at the time of the incident, and our homicide investigators are still working to identify all of the parties who may have fired during the incident.”

Cellphone video captured the moments a man wearing black shorts and carrying a black backpack raised a weapon and started opening fire around 9 p.m. Nearly two dozen shots rang out in less than a minute. People were seen ducking for cover. The man recording called out, “Oh my God!” when coming across someone in a pool of blood in the park.

Schroeder also showed a surveillance video depicting the moment the gunman first started firing, inciting panic among those camping out in the park. Louisville Metro Police responded to shots fired in the park within four minutes.

Personnel from the Jefferson County Sheriff's Office responded to the park and performed life-saving measures on the man who eventually died at the scene, according to police.

Law enforcement also responded to calls about a second victim who had been shot at the Hall of Justice, across the street from the park. That person was rushed to the hospital and is expected to survive.

A team from Metro Public Works started packing up tents, according to the police department. Personal belongings would be secured and will be available for pickup later Sunday. Louisville Chief of Public Services Amy Hess said the city would enforce its ban on any camping paraphernalia and temporary shelters inside the park following Saturday’s shooting.

“It’s a safety issue at this point. Over the past several nights we’ve seen increasingly dangerous behavior. We’ve seen several fistfights. We’ve also seen an increasing number of weapons that gave us concern, but all that led up to last night’s activity and last night’s shooting,” Hess said. “But yet, we wanted to balance the First Amendment exercise of free speech, the need to come together, while at the same time understanding that ordinances were in place for a reason, and it was particularly to help protect public safety.”

Mayor Greg Fischer asked the public not to allow the shooting to distract from the message of “peaceful protesters.”

“I ask everybody to put whatever differences aside and work together for the change that we want to see," Fischer said. "We can’t let this one act of senseless violence slow or halt what peaceful protesters are demanding in our city and our country and demand that we once and for all dismantle the racist systems and institutions that for far too long have denied equal rights, access and opportunity to too many people simply because of the color of their skin.”

Before the shooting unfolded, the mayor, a Democrat said last Thursday he was “aware of rumors suggesting that armed militia are coming to downtown Louisville this weekend.”

“Our message is simple: We don’t need you here. Our focus is on facilitating peaceful protests,” he tweeted.

The news conference Sunday clarified that the gunman was a protester. Speculation on social media suggested that an armed patriot group could have been responsible for the shooting. Schroeder also shut down other rumors that Metro Police had paid the gunman to open fire at protesters.

Members of a group named the “American Freedom Fighters” did plan a counter-protest in Louisville on Saturday against those camped out to force officials to prosecute the officers involved in the death of Breonna Taylor, The Courier-Journal reported.  Despite bringing guns into the city, most members of the group dispersed before the shooting began.

This was not the first shooting in Louisville at a protest dedicated to Taylor. Seven people were injured on May 28 when gunfire broke out near City Hall. In response, Taylor’s mother released a statement imploring protesters to fight for justice “without hurting each other.”

Taylor was shot and killed by plainclothes officers conducting a “no-knock” search warrant at her apartment in March as part of a narcotics investigation. No drugs were found at the scene.

Her boyfriend said he thought someone was breaking into the apartment in the middle of the night and fired at the officers. Taylor was struck by the officers’ returning fire.

The city has since banned no-knock warrants. No charges have been brought against the officers involved in her death. One officer, Brett Hankison, was fired from the force last week.