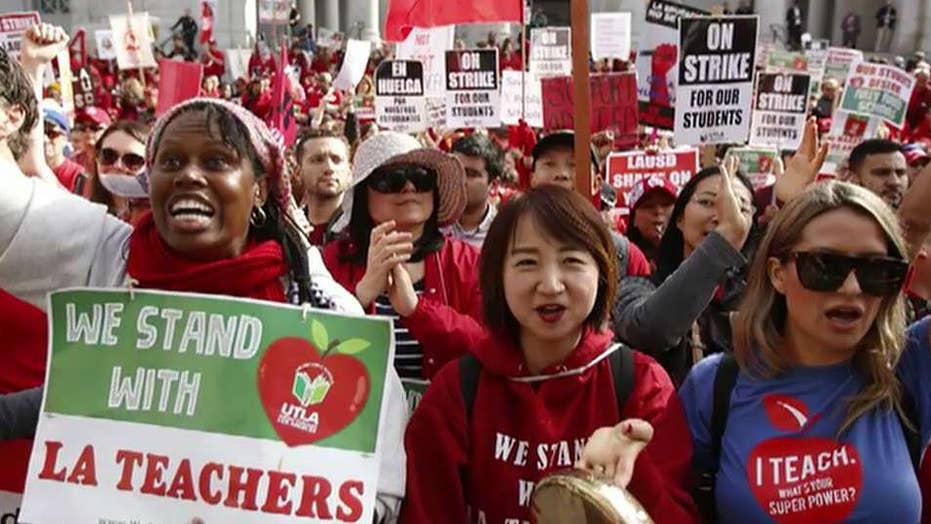 United Teachers Los Angeles went on strike January 14 after a deal with the Los Angeles school district regarding class size and higher pay, among other issues, was not met; Hillary Vaughn reports from Los Angeles.

Officials with the Los Angeles, Calif. school district and the city's teacher's union reached a tentative deal Tuesday that could possibly end the union's first strike in 30 years.

The deal between the two sides means teachers in a part of the school district — the second biggest in the nation — could return to classrooms Wednesday. The tentative deal was announced by Los Angeles Mayor Eric Garcetti, who noted it requires the approval of the teachers and the Board of Education before it can be finalized.

Thousands of the 35,000 members of the United Teachers Los Angeles went on strike Jan. 14 after a deal with the Los Angeles school district regarding class size and higher pay, among other issues, was not met.

The Los Angeles Unified School District argued at the time it didn't have the funding to pay for the changes the teachers were demanding.

"We are at an impasse," union president Alex Caputo-Pearl said ahead of the strike.

The UTLA said 141,631 students attended school the first day of the strike, but noted the number was incomplete because 54 schools had not reported their attendance figures by the time the school district released its statement.

Roughly 98 percent of teachers with United Teachers Los Angeles who voted in August supported authorizing a strike, though it wasn’t clear at the time when the union’s leaders were planning on calling the walkout.

The two sides have been in negotiations since April 2017, the union said in a statement online, adding its teachers have been working without a contract for nearly a year.

Ahead of the strike, John Rogers, a professor of education at the University of California, Los Angeles, said he didn't see a way around it.

"I would be surprised if a strike doesn't come about because I think each side has a real interest in demonstrating the dominance of their positions," Rogers told The Associated Press, which added both sides rejected Garcetti's offer to broker a deal.

Read on for more information on the strike affected the roughly 640,000 students that are part of the district.

What do the teachers want?

Teachers earn between $44,000 and $86,000 a year depending on their education and experience, according to the Los Angeles County Office of Education.

The average salary for teachers in the district is $75,000. This largely reflects the older, more experienced workforce.

The teacher’s union is pleading with the district to increase teachers salaries by 6.5 percent.

More specifically, the district had offered a 6 percent raise over the first two years of a three-year contract, but the union wants a 6.5 percent hike at the start of a two-year contract.

The union cites a $1.8 billion reserve that they argue could fund the pay increases among other demands. But the district says the money in the reserve is needed for expenses such as retiree benefits.

"School budgets in California are set in three-year increments, and from July 2018 to June 2021, Los Angeles Unified will spend $24 billion educating students. This includes its entire, existing $1.8 billion reserve," LAUSD recently said in a recent explanation of its budget.

“Even with $1.86 billion reserves, LAUSD says it does not have the money to improve our schools to include lower class sizes, accountability for charter schools and a real reinvestment in school safety, vital staffing and educational programs,” the UTLA said in a statement, adding the cost of living in the city has increased 27 percent since 2008.

The UTLA says most class sizes surpass 30 students — upwards of 46 students have reportedly been counted in some classrooms, NPR reported.

The larger the class size, the fewer teachers that need to be hired, according to the publication. This means the district could save money in this area.

In one of the latest offers from the LAUSD, the district offered to spend $105 million to reduce the size of classes. The amount represents a $75 million increase from a previous offer, according to LAist. However, the proposal would only cover the next school year, according to the publication.

The offer was called “inadequate” by the union, LAist reported.

“We are extremely disappointed and frustrated that union leadership has turned down our offer and – once again – failed to put forth any proposal to try and resolve the issues of class size and salary,” the LAUSD said in response.

The union is calling for more nurses, librarians and counselors to "fully staff" the district's campuses in Los Angeles and all or parts of 31 smaller cities, plus several unincorporated areas.

The district’s recent offer included efforts to improve these areas.

What does this mean for students?

Schools will remain open during the strike.

The district has hired hundreds of substitutes to replace teachers and other staff members who leave for picket lines, but UTLA officials said it’s "irresponsible" to hire substitutes. They also called on parents to consider keeping students home or join marchers.

The district has also released a guide to help area families prepare for the potential strike.