Fed up Los Angeles parents say they will not sign in to Zoom courses and stage protests instead; mom Cynthia Rojas and her 3rd grader Nicholas join 'Fox &amp; Friends' to discuss the strategy.

A parent in Los Angeles, Calif. told "Fox & Friends" on Monday that she helped organized a Zoom blackout as part of a protest to reopen schools for in-person learning because "there is a really big urgency to get our kids back in school."

Cynthia Rojas said she is speaking out because she feels parents in the Los Angeles Unified School District (LAUSD) are being misled.

The Zoom blackout started Monday and will continue for "as many days as it takes," according to a flier, which added that "enough is enough" and that parents "can no longer sit by and wait for UTLA to come up with more excuses to keep our schools closed."

Rojas noted that over the past few months parents have learned that they "have very little voice in this whole situation."

"We don’t have a seat at the table when it comes to the negotiations between LAUSD and UTLA (United Teachers Los Angeles) and so we’ve been trying the standard calling and voicemails, and e-mails, but it’s not working," Rojas continued.  "And so I’m part of a group of just parents who are just really frustrated."

Rojas stressed that she thinks the Zoom blackout is "going to give feedback to LAUSD and UTLA that they are not providing an education for our children."

"I feel like every time we log in, it gives them the opportunity to say, ‘Hey, oh we’re providing education, there’s online learning, what’s the big rush to get back to school,’" she explained.

"And what we’re seeing is there is a really big urgency to get our kids back in school," she continued, pointing to science showing that it is safe to return to in-person learning.

Rojas said parents are "demanding" that they should have the choice whether to send their children back to school.

When asked what he missed the most about going to school, Rojas’ son Nicholas Jardim said, "What I really miss the most is my friends and how I used to play with them at recess." 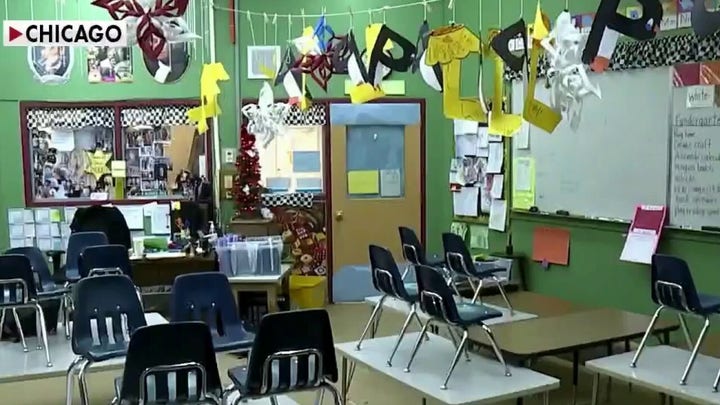 He added that he is sad about the current situation the coronavirus pandemic has created.

In a statement, UTLA president Cecily Myart-Cruz said, "Local and state officials did not help create the right conditions to reopen schools for in-person instruction and educators are being targeted for trying to protect our students and our community."

"And what we’re realizing is they’re not even close to opening," Rojas went on to say. "I mean, there is not even a plan between LAUSD and UTLA to open schools. It’s been 11 months. We don’t even have a plan and they keep stringing parents along."

She added that the latest update parents received was that once all the teachers are vaccinated schools will reopen.

In an update to the school community sent to Fox News, LAUSD Superintendent Austin Beutner said, "As difficult as the decision was to close school classrooms, reopening is even harder."

"We have to balance the learning needs of students, the support we provide to working families and the responsibility to protect the health and safety of all in the school community."

He stressed that "We cannot – and will not – compromise on health and safety."

He went on to write that "The vaccine plays a critical role in reopening schools as safely as possible, in particular in communities which have been hardest hit by the virus."

He also wrote, "Let’s get school staff vaccinated and start using school-based vaccination sites to provide access to the families we serve."

"We want to provide a service to the entire education community and hope County Health authorities will help us get open this week by providing the appropriate doses of the vaccine," Beutner added.