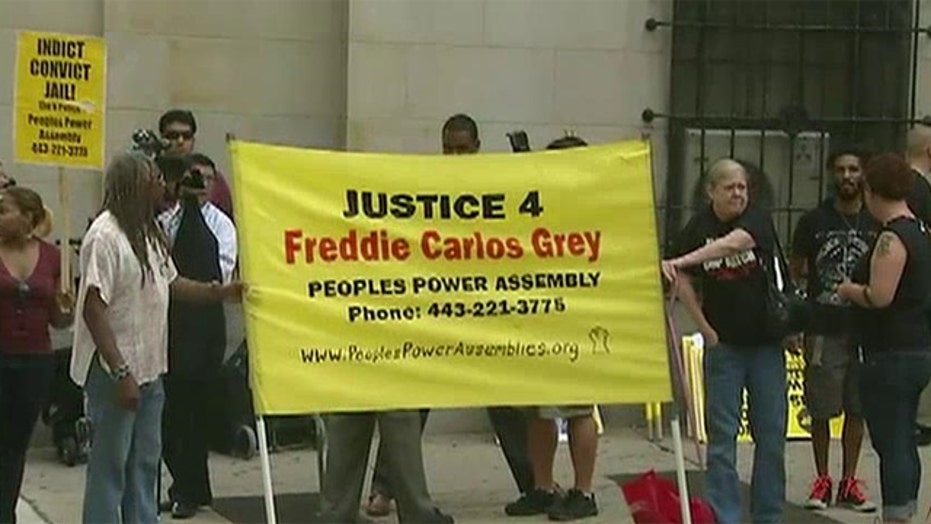 BALTIMORE – A Baltimore judge on Wednesday refused to dismiss charges against six police officers in connection with the death of a black man from injuries he suffered while in custody. The judge also refused to remove the prosecutor in the case.

The death of 25-year-old Freddie Gray — who succumbed to injuries sustained after his arrest on April 12 — sparked rioting and unrest that shook Baltimore for days. Protests Wednesday outside the Baltimore courtroom where a pretrial hearing on the charges took place resulted in just one arrest.

Defense attorneys failed to persuade Circuit Judge Barry Williams that what they claimed was prosecutorial misconduct on the part of State's Attorney Marilyn Mosby was reason enough to drop the charges against the police officers — which range from second-degree assault to second-degree murder.

Williams ruled that while Mosby's public comments regarding initial statements made by the officers to investigators were "troubling," they were not likely to prejudice a jury.

Andrew Graham, an attorney representing Officer Caesar Goodson, unsuccessfully argued that Mosby's comments after filing charges against the officers were "reckless and unprofessional," and violated the rules of conduct. He likened Mosby's comments on the case to a "pep rally calling for payback."

Williams also ruled against another defense motion, one that sought to have Mosby removed from the case due to what the defense contended were conflicts of interest. He called the assertion that Mosby's judgment was impacted by the fact that her husband Nick Mosby is a councilman in a district that experienced a disproportionate amount of violence "troubling and condescending."

"Being married to a councilman is not a reason for recusal," he said.

Williams added that allegations of prosecutorial misconduct would have to be addressed by the state Attorney Grievance Commission.

Prosecutors also told Williams they will put into evidence redacted statements that the officers made to investigators. Both sides agreed to ask for an order sealing the statements from public view.

Officers Edward Nero, Garrett Miller, William Porter and Goodson, as well as Lt. Brian Rice and Sgt. Alicia White, face charges in Gray's death. They did not attend the hearing. All six are charged with second-degree assault, reckless endangerment and misconduct in office. Rice, Porter and White also face manslaughter charges, and Goodson faces an additional charge of second-degree murder.

Andrew Graham, Goodson's lawyer, argued that his client — who faces the most serious charge — would face a great risk of "spillover effect and transference of guilt."

Prosecutors wanted to try Goodson, Nero and White together. Prosecutor Jan Bledsoe argued that evidence to be introduced at trial was relevant to all three.

Separately, the judge was scheduled to hear Sept. 10 a defense motion for a change of venue.

Dozens of protesters made their way about six blocks to the Inner Harbor before the pretrial hearing began. Dozens of officers responded and cleared protesters from the streets to keep traffic moving at the end of the morning rush hour.

One person was arrested. Interim Baltimore Police Commissioner Kevin Davis told WBAL-AM that a protester "kicked a police officer in the face, and that's unacceptable."

Police spokesman T.J. Smith said charges are being filed against the man. He did not specify what the charges would be. The man was arrested for blocking the road and ignoring warnings to return to sidewalk, according to a police news release.

The man arrested was identified by witnesses as Kwame Rose, a well-known local activist.