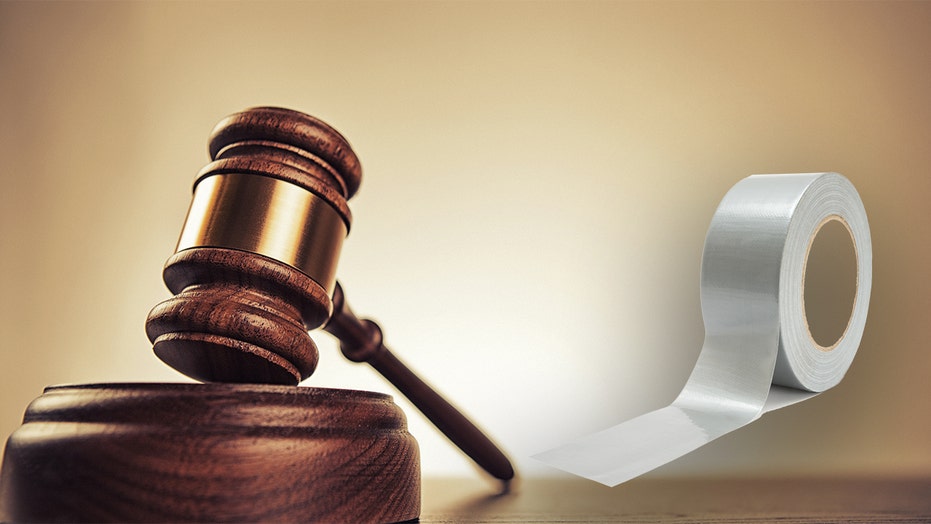 A Louisiana man had his mouth taped shut by a 15th Judicial District Judge, after he repeatedly interrupted during a sentencing hearing on July 18 in Lafayette.

During a hearing of Michael C. Duhon, who was convicted of money laundering and theft of over 25,000 in February 2019, Judge Marilyn Castle asked a bailiff to tape his mouth shut while witnesses were on the stand. (iStock)

During a hearing of Michael C. Duhon, who was convicted of money laundering and theft of more than $25,000 in February 2019, Judge Marilyn Castle asked a bailiff to tape his mouth shut while witnesses were on the stand.

Her actions stemmed from objections raised by Duhon when Castle had asked him to stop submitting motions on his own behalf, instead of his lawyer, Aaron Adams. Duhon later objected when evidence was submitted in the case and he also tried to argue against the inclusion of evidence but was told again to speak through his attorney, according to The Acadiana Advocate.

EX-COLLEGE FOOTBALL PLAYER, 22, ACCUSED OF KILLING 3 AT RANDOM IN LOUISIANA IS DENIED BAIL

After requesting twice for Duhon to remain silent, Castle finally had enough and ordered his mouth shut.

“During testimony of Tanya Ortego, the Court ordered the Bailiff to tape the defendant’s mouth due to the defendant’s consistent interruption of this court proceeding and multiple instructions from the Court to remain silent,” the minutes said.

Defense attorney Adams objected to the use of duct tape on his client, which was removed following his request. The minutes didn't say how long the duct tape stayed on Duhon's mouth, although he did ask the judge to remove Duhon from the courtroom instead of using the primitive method.

The incident also caused a public defender who was present during the ordeal to be charged with contempt after he recorded the series of events. Public defender Michael Gregory was ordered to appear in court last Friday with Castle presiding over the hearing, even though he wasn't connected with the case or Duhon.

The court order given to Gregory said he violated district court rules “by broadcasting, televising, recording or taking photographs in the courtroom” because he recorded “a portion of the court proceedings during a sentencing hearing and broadcast those proceedings to others.”

LOUISIANA TEEN, 19, DIES DAYS AFTER BEING PULLED UNDER BY RIP CURRENT AT FLORIDA BEACH

Castle ruled that Gregory was in contempt of court and ordered him to not bring his cellphone or any electronic devices to court for six months and required him to pay a $100 fine, according to KATC.

Duhon was sentenced by Castle to 11 years in prison during the hearing with credit for time served and he was recommended by the judge to be taken to a mental health facility.

Castle's secretary said the judge "can't comment because the Code of Judicial Conduct prohibits her from commenting on ongoing proceedings."

The use of duct tape is controversial but has been allowed in the past. In 1970, the United States Supreme Court ruled a trial judge could gag a defendant during trial, so they could remain in the courtroom without disturbing the proceedings.

Last year, an Ohio judge apologized after he ordered a defendant's mouth shut following several outbursts during a sentencing hearing.