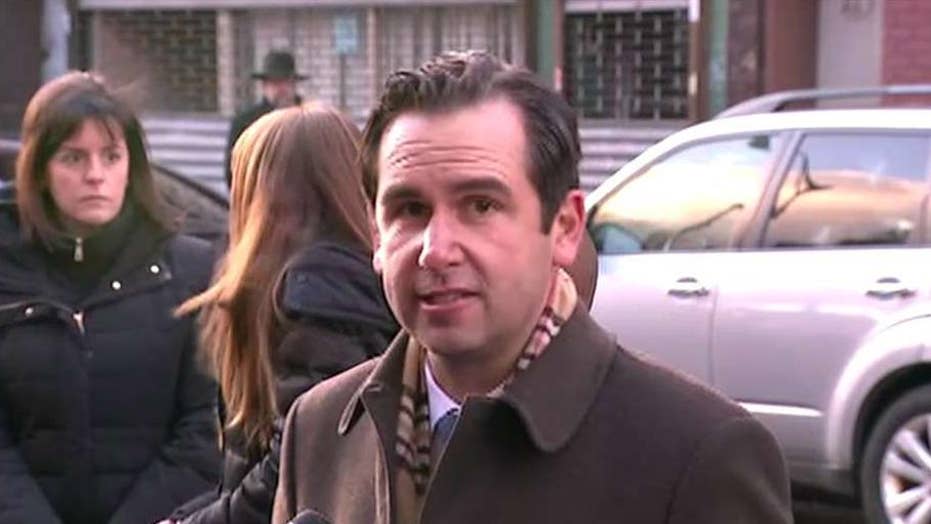 Fox News’ Bryan Llenas reports from Jersey City on the anti-Semitic attack and the background of the assailants.

The anti-Semitic couple who gunned down three people at a Jewish market in Jersey City this week may have actually wanted to shoot up a religious school next door that had dozens of children inside, the city’s mayor suggested Friday.

Steven Fulop, in a series of tweets, described how the attack that unfolded Tuesday could have been far worse. It left six people dead in total: four victims, including Jersey City Detective Joseph Seals, and the suspects, David Anderson, 47, and Francine Graham, 50.

“My opinion is that as more info comes out it’ll become increasingly clear that the target was the 50 children at the Yeshiva attached to that store. We will never know 100% but the doorway to the yeshiva was 3 feet away + it seems he goes in that direction 1st,” Fulop wrote in a tweet Friday.

“This is a horrible tragedy but even in so much darkness with lives lost there is some light in that without question had the bravery/quick response of the police not trapped them in the store this could have been much much worse,” he added.

JERSEY CITY MAYOR: ANTI-SEMITISM MUST BE CALLED OUT

The FBI declined to comment directly Friday on Fulop's assertion.

"Every member of the public is free to speculate when a tragedy like this occurs," Special Agent in Charge Gregory W. Ehrie said in a statement. "The FBI seeks out facts and methodically reviews evidence before drawing any conclusions."

The two killers were armed with a variety of weapons, including an AR-15-style rifle and a shotgun, when they stormed into the store in an assault that left the scene littered with several hundred shell casings, broken glass and a community in mourning. A pipe bomb was also found in a stolen U-Haul van.

"Everything about it is consistent, that they did not intend to harm only four people -- that they had a larger plan," Director of Public Safety James Shea told reporters Friday. “Based on what we know now, the amount of guns, the amount of ammunition, the fact that they had explosive devices -- we would have to assume they planned to do a lot more damage than we allowed them to do.”

Police officers stand near the scene of a gun fight at a kosher supermarket in Jersey City, N.J., on Thursday.

Anderson and Graham appear to have acted alone even though they had expressed interest in the Black Hebrew Israelites, a fringe religious group that often disparages whites and Jews, New Jersey officials have said.

Attorney General Gurbir Grewal said Thursday that the attack was driven by hatred of Jews and law enforcement and is being investigated as an act of domestic terrorism.

Grewal added that social media posts, witness interviews and other evidence reflected the couple's hatred of Jews and police.

Orthodox Jewish men carry Moshe Deutsch's casket outside a Brooklyn synagogue following his funeral on Wednesday in New York. Deutsch was one of the victims killed in Tuesday's shooting in Jersey City, N.J.

The attackers killed three people in the market, in addition to the police officer at a cemetery about a mile away, before dying in an hourslong gunbattle with police Tuesday afternoon, authorities said.

Shea called Seals “the ultimate detective or officer we would point to to tell young officers, 'This is how you should behave.'"

He said Friday that he doubted Seals would have been ambushed by the pair. Authorities haven't disclosed why Seals was in the cemetery or details of the confrontation that led to his death.