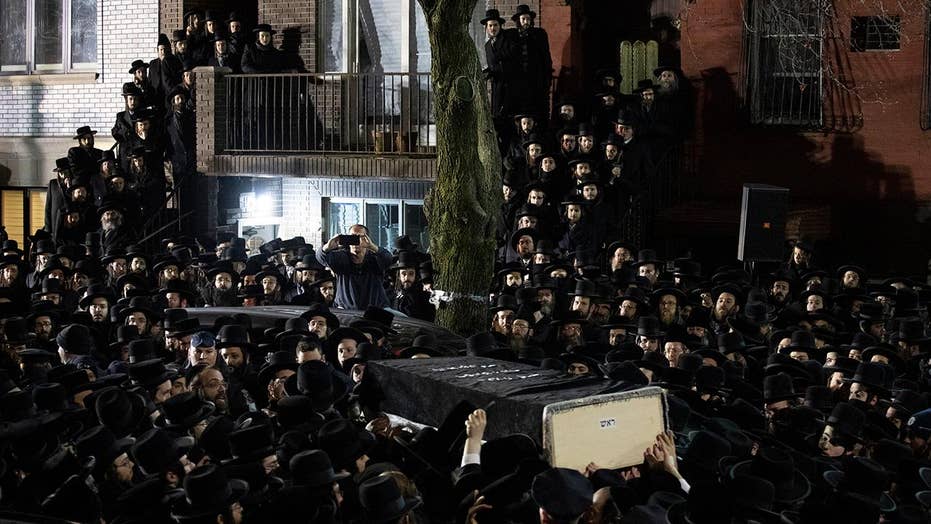 Mourners pour into the streets of Jersey City after the kosher market shooting that rocked the Jewish community.

Thousands gathered outside New York City Wednesday night as funeral services were held for two of the victims who were killed in the Jersey City kosher market shooting earlier this week.

Moshe Deutsch, 24, and Mindy Ferencz, 31, were both mourned by members of the ultra-orthodox Jewish community following the deadly attack that investigators have said might've been motivated by anti-Semitism and was described as a hate crime by local officials.

The two were killed on Tuesday when two suspects, identified as Black Hebrew Israelites -- a movement whose members have been known to rail against white people and Jews -- opened fire in a "targeted" attack on the JC Kosher supermarket in Jersey City, an area of around 270,000 people located just across the Hudson River from Manhattan.

In total, six people — including suspects David Anderson, 47, and Francine Graham, 50 — were killed in the hours-long shootout. Det. Joseph Seals, a 40-year-old Jersey City police officer and father-of-five, was the first to be killed in the attack when he was fatally shot at nearby Bayview Cemetery. Douglas Rodriguez, 49, an employee at the kosher market who came to the U.S. from Ecuador, was also killed.

On Wednesday night, Deutsch, a rabbinical student who was buying a sandwich at the shop, was remembered at the Satmar Shul synagogue in Williamsburg, Brooklyn. Ferencz, the co-owner of the shop, was also mourned during her funeral services in Jersey City.

“They were very good people,” Shulem Freund, a relative of Ferencz's, told the New York Post. “Very friendly. She volunteered to help special needs kids and he helped the community.”

The prospect of attacks against Jews weighed heavily on the more than 300 people who attended a vigil Wednesday night at a synagogue about a mile from where the shootings took place, and the heartbreak was obvious as thousands of mostly men followed Ferencz' casket through the streets of Brooklyn hugging and crying while many people prayed.

The JC Kosher market is a central fixture in a growing community of Orthodox Jews who have been moving to Jersey City in recent years and settling in what was a mostly black section of Jersey City, causing some resentment.

In the deadliest such attack in U.S. history, 11 people were killed in an October 2018 shooting at a synagogue in Pittsburgh. Last April, a gunman opened fire at a synagogue north of San Diego, killing a woman and wounding a rabbi and two others.