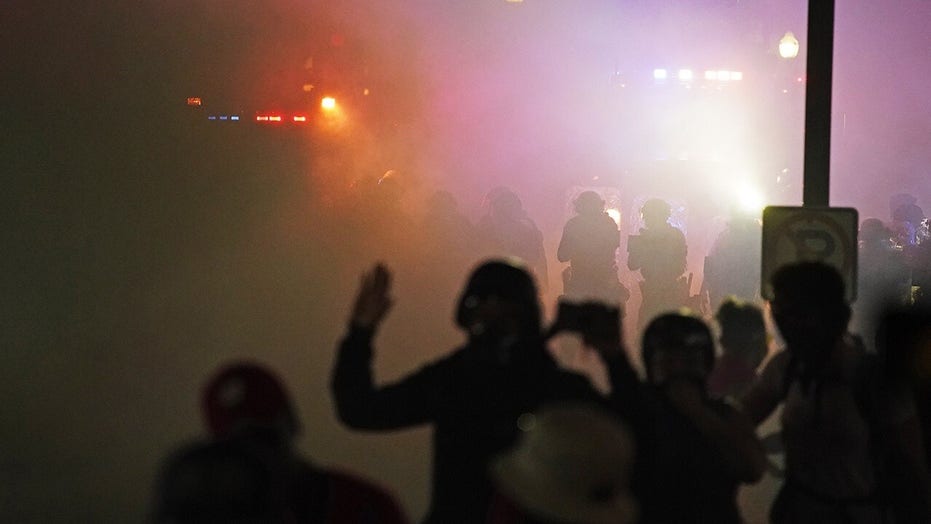 Kenosha police are searching Wednesday for a suspect seen on video armed with a long gun after a shooting late Tuesday killed two people and wounded a third.

The deadly violence broke out during the third night of civil unrest since 29-year-old Jacob Blake, a Black man, was shot at close range by city police officers, leaving him partially paralyzed.

Officers responded at about 11:45 p.m. Tuesday to reports of shots fired and multiple gunshot victims near 63rd Street and Sheridan Road. Two people were killed, and a third was hospitalized with serious, but not life-threatening injuries, the Kenosha Police Department said in a statement.

WARNING: VIDEO BELOW IS GRAPHIC

Investigators were looking into whether the shooting unfolded as a result of a conflict that broke out between demonstrators and “self-styled militias guarding a gas station,” Kenosha County Sheriff David Beth told the New York Times.

A man (to the right in this photo) was shot in the chest as fighting erupted on the streets of Kenosha on Tuesday night. (Tayfun Coskun/Anadolu Agency via Getty Images)

Videos on social media showed a chaotic scene after nightfall, as crowds seemed to chase a man carrying a rifle down the street, before eventually knocking him to the ground and trying to grab his weapon, Reuters reported. A bloodied man was seen with what appeared to be a serious arm wound. Another video showed a man with a head injury as crowds gathered around him to treat him.

The damage in Kenosha includes many burned-out cars. (Fox News)

Wisconsin Gov. Tony Evers, a Democrat, had called for calm earlier Tuesday, while also declaring a state of emergency under which he doubled the National Guard deployment in Kenosha from 125 to 250. The night before, crowds destroyed dozens of buildings and set more than 30 fires in the city’s downtown.

“We cannot allow the cycle of systemic racism and injustice to continue,” said Evers, who has been facing mounting pressure from Republicans over his handling of the unrest. “We also cannot continue going down this path of damage and destruction.” 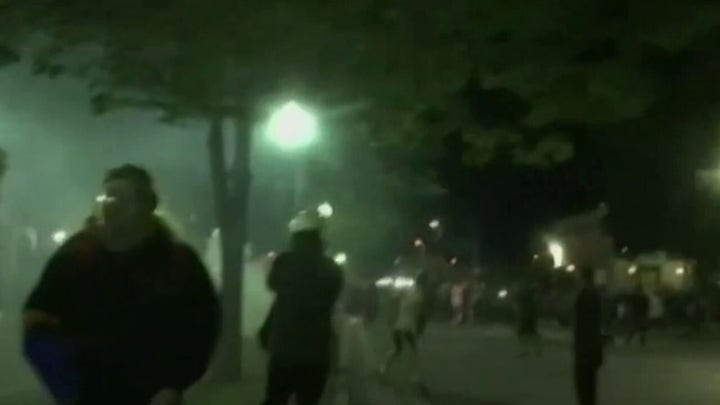 Hundreds of people again defied curfew Tuesday night in Kenosha, where destruction marred protests the previous night as fires were set and businesses vandalized. There were 34 fires associated with that unrest, with 30 businesses destroyed or damaged along with an unknown number of homes, Kenosha Fire Chief Charles Leipzig told the Kenosha News.

“Nobody deserves this,” said Pat Oertle, owner of Computer Adventure, which was left “destroyed” by looters Monday night who made out of the store with stolen computers. “This accomplishes nothing. This is not justice that they’re looking for.”

Fights breaking out during the third day of protests over the shooting of Jacob Blake in Kenosha, Wisconsin. (Tayfun Coskun/Anadolu Agency via Getty Images)

Jacob Blake, whom Kenosha police shot multiple times, has been paralyzed, and it would “take a miracle” for him to walk again, his family’s attorney said Tuesday, while calling for the officer who fired shots to be arrested and others involved to lose their jobs.

The shooting of Blake on Sunday in Kenosha — apparently in the back while three of his children looked on — was captured on cellphone video and ignited new protests over racial injustice in several cities, coming just three months after the death of George Floyd at the hands of Minneapolis police touched off a wider reckoning on race.

A protester kicking a smoke canister Tuesday in Kenosha, Wis. Anger over the Sunday shooting of Jacob Blake, a Black man, by police spilled into the streets for a third night. (AP Photo/Morry Gash)

Police have said little about what happened, other than that they were responding to a domestic dispute. The officers involved have not been named. The Wisconsin Department of Justice is investigating.

Blake’s mother, Julia Jackson, said the damage in Kenosha did not reflect what her family wanted, and if her son could see it, he would be “very unpleased.”

“Do Jacob justice on this level and examine your hearts,” she pleaded at a news conference Tuesday, as her son was undergoing surgery. “As I pray for my son’s healing physically, emotionally and spiritually, I also have been praying even before this for the healing of our country.”

Police fired tear gas for a third night Tuesday to disperse protesters who had gathered outside Kenosha’s courthouse, where some shook a protective fence and threw water bottles and fireworks at officers lined up behind it. Police then used armored vehicles and officers with shields pushed back the crowd when protesters ignored warnings to leave a nearby park.

Anger over the shooting has spilled into the streets of Kenosha and other cities, including Los Angeles, Wisconsin’s capital of Madison and in Minneapolis, the epicenter of the Black Lives Matter movement this summer following Floyd’s death.