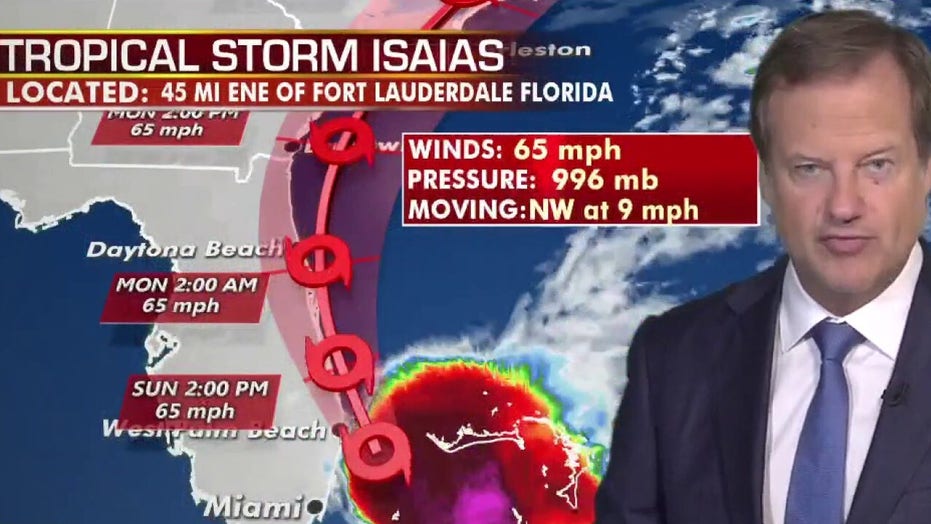 The U.S. National Hurricane Center in Miami said the storm is packing maximum sustained winds of 65 mph an, as of 2 p.m. Sunday, was about 90 miles southeast of Cape Canaveral, moving north-northwest at 9 mph.

"The good news is that we have a tropical storm, not a hurricane," Fox News Chief Meteorologist Rick Reichmuth said on "Fox & Friends Weekend."

ISAIAS WEAKENS TO TROPICAL STORM IN BAHAMAS, EXPECTED TO STRENGTHEN AS IT HEADS TOWARD FLORIDA

The storm weakened to a tropical storm late Saturday but remained a powerful force.

Tropical Storm Isaias is seen off the coast of Florida on Sunday, August 2, 2020. (NOAA/GOES-East)

As the storm moves now toward the southeast coast of Florida, a tropical storm warning is in effect from Jupiter Inlet, Fla. to Surf City, N.C.

According to Reichmuth, the worst of the storm with heavy rain is on the east side of the system and will stay over the ocean, not impacting most of Florida. Areas along Florida's eastern coast will see high winds and rain, but nothing that should cause major damage.

Forecasters have warned that up to 4 feet of storm surge is possible, with dangerous surf.

“Don't be fooled by the downgrade,” Florida Gov. Ron DeSantis warned during a news conference on Saturday, urging people to remain vigilent.

The governor said the state is anticipating power outages and asked residents to have a week’s supply of water, food, and medicine on hand. Officials wrestled with how to prepare shelters where people can seek refuge from the storm if necessary, while safely social distancing to prevent the spread of coronavirus.

Dozens of utility trucks are lined up to be processed by Florida Power &amp; Light at Daytona International Speedway on Saturday, Aug. 1, 2020. (Stephen M. Dowell/Orlando Sentinel via AP)

Florida Power and Light spokesman Bryan Garner told FOX29 the utility has assembled about 10,000 workers, including 2,000 from 20 different states, to restore power as quickly as possible.

Natalie Betancur, stocking up at a grocery in Palm Beach Gardens, told The Associated Press the storm itself doesn't cause her a great amount of concern.

“The hurricane is not that serious, but I feel that the public is really panicking because it’s a hurricane and we’re in the middle of a pandemic," she said.

A man carries drinking water for a customer at a water depot store before the arrival of Hurricane Isaias in Freeport, Grand Bahama, Bahamas, Friday, July 31, 2020. (AP Photo/Tim Aylen)

Victor Edery, who has lived in Hollywood Beach for eight years, told WSVN after riding out Hurricane Irma in 2017 that he also wasn't concerned about Isaias.

Isaias has been destructive in the Caribbean, where it became a hurricane on Thursday and caused widespread flooding and small landslides in the Dominican Republic and Puerto Rico.

One man died in the Dominican Republic. In Puerto Rico, the National Guard rescued at least 35 people from floodwaters that swept away one woman. Her body was recovered Saturday.

Isaias snapped trees and knocked out power as it blew through the Bahamas on Saturday and churned toward the Florida coast.

Between 2 to 4 feet of storm surge may cause localized flooding in those regions. A narrow swath of 3 to 4 inches of rain can also be expected from South Carolina through New England.

As the system moves up the Atlantic seaboard, the worst of the weather for major cities in the Northeast will arrive by Tuesday afternoon into the evening, when the heaviest rain develops over inland locations.

The storm comes about a week before the most active period of hurricane season, a threat that lasts about two months.