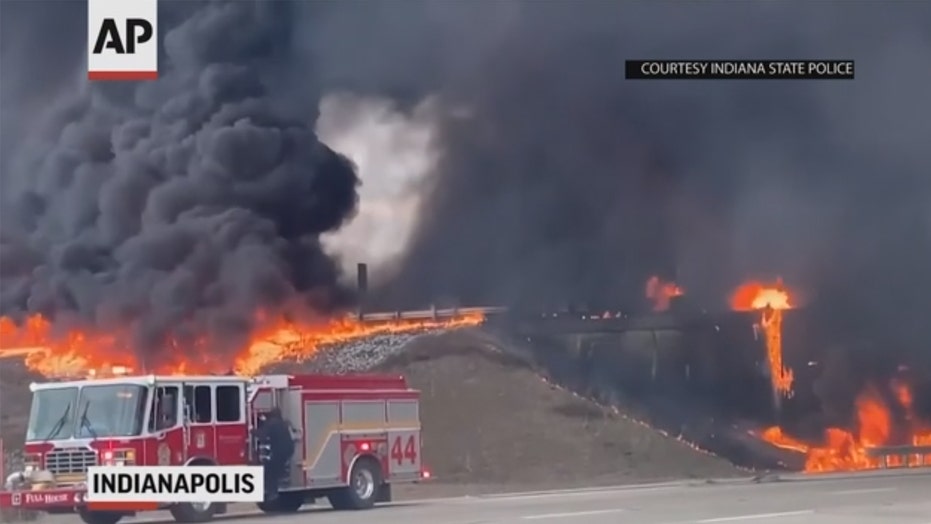 An Indiana woman who had given birth just a few days earlier said her instincts kicked in when she stopped along a highway to help save a driver who was on fire after his tanker truck loaded with jet fuel burst into flames.

Holly McNally, 35, had just left a hospital's neointensive care unit Thursday afternoon with her mother after they checked in on her son Connor, who was born Monday. They saw the overturned truck and flames along an Interstate 465 bridge that crosses over Interstate 70 on Indianapolis' far east side.

McNally said she slowed her car down and was stunned to see the 59-year-old driver on fire after he managed to get out of the truck on his own.

McNally, who has three other children, ages 8, 11 and 15, said that despite the risk to herself, she knew she had to help.

“I guess mom-and gut-instinct. If that were my child or my husband or my family member, I would want somebody to run up if they could," she told The Indianapolis Star.

Running toward the driver, McNally crossed paths with another man who was bringing a blanket to help extinguish the flames and cover the driver, whose clothes had burned off. As they began walking him away from the fire, an explosion rocked the overturned truck, which the driver told them was loaded with 4000 gallons (15,142 litres) of jet fuel.

“We started to go down the embankment a little bit, and I could smell the fluid running past my feet,” McNally said. “I’m thinking I’m gonna blow up in an explosion, and not see my baby again.”

A second explosion then caused the fire to spread and follow the three of them down the embankment. and the driver, who appeared to be in shock, began to slow down. Luckily, another man ran to the embankment and helped move the driver to safety.

PHILADELPHIA WOMAN ADOPTS 4 KIDS FROM SAME FAMILY: 'I KEPT THEM ALL TOGETHER'

Another Indiana State Police trooper drove down the highway embankment to meet the three rescuers and the driver. He used clothing from his gym bag to cover the man until emergency medical technicians arrived, Indianapolis Fire Department Battalion Chief Rita Reith said.

Trucking company Jet Star Inc. released a statement Friday, thanking those who helped save the driver, which it identified as Jeffrey “Duke” Denman.

“We are grateful that no one else was injured or involved. We would also like to offer a heartfelt `thank you' to the brave `Good Samaritan’s' that rushed to aid our driver and help him escape from further harm," the company said, also thanking police, firefighters and public safety agencies that helped.