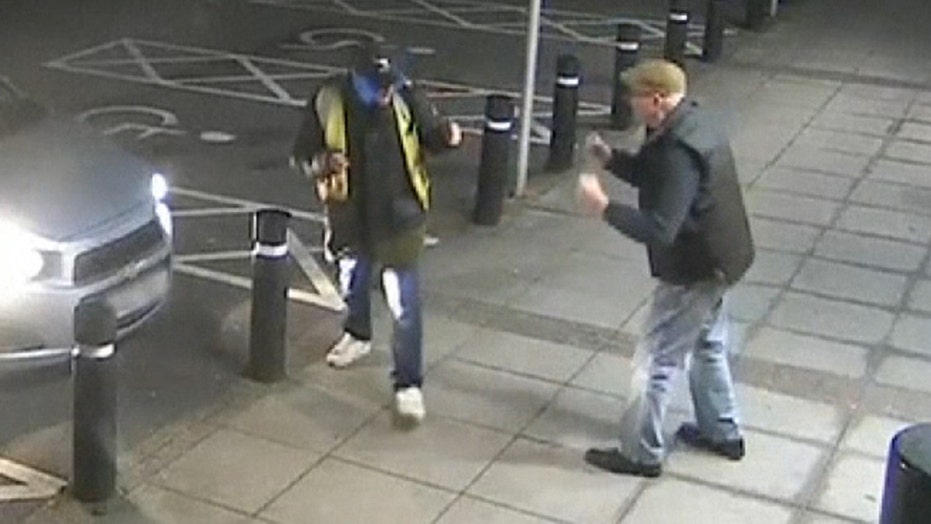 A 77-year-old man is being hailed for his bravery after video caught him going toe-to-toe with only his bare knuckles against an apparent knife-wielding mugger in the United Kingdom earlier this month.

The senior, identified as Trevor, had just withdrawn money from an ATM in Cardiff, Wales, early on Feb. 5 when an unknown white male approached and demanded his cash and bank card, South Wales police said.

Trevor appeared to yell at the suspect, who kept backing off as the 77-year-old landed blow after blow. (South Wales Police)

A man clad in black with a yellow vest approached Trevor and grabbed him by the collar. The 77-year-old was quick to act, holding the man in a shoulder lock before hitting him with punches and jabs.

The suspect appeared to wield at least one sharp object and attempted to jab the man with it several times. The suspect, however, remained no match for Trevor and was forced to slowly back off until he goes out of the camera shot.

Police lauded Trevor, saying he “bravely fought off the suspect,” who eventually ran off empty-handed.

His grit during the early morning scuffle earned him praise on social media, along with concern for his well-being.

South Wales police replied and confirmed Trevor was unharmed during the fight.

“Detectives have been checking in on him and he's doing okay," police tweeted. “He was shocked & very shaky after the incident, but thankful nothing worse had happened.”

Police have appealed to the public for any information regarding the suspect.