The three lawmakers who will manage the impeachment trial proceedings that could remove Philadelphia District Attorney Larry Krasner from office were named on Friday.

Pennsylvania House Speaker Bryan Cutler named two Republicans – Reps. Craig Williams and Tim Bonner – and Rep. Jared Solomon, a Democrat, to deliver articles of impeachment against Krasner and manage the trial on behalf of the House.

"These members exemplify the competency and character required in this moment," Cutler said. "Their credibility cannot be understated, and each of their diverse experiences and education will help ensure this process is treated with the utmost professionalism and thoroughness. This trial must be transparent and presented at the highest possible standard, something this committee is more than capable of doing."

Krasner was impeached this week largely along party lines in the state House. He is accused of "misbehavior in office" and obstructing a legislative committee investigating his office. Much of the allegations stem from Philadelphia's crime wave as critics contend Krasner's progressive policies have enabled criminals and made the city less safe.

"His lack of proper leadership serves as a direct and proximate cause of the crisis currently facing the city of Philadelphia," states House Resolution No. 240, which called for Krasner's impeachment.

Krasner has criticized the GOP-led effort, saying they haven't presented a "shred of evidence connecting our policies to any uptick in crime."

"We were never given the opportunity to defend our ideas and policies — policies I would have been proud to explain," he said this week. "That Pennsylvania Republicans willfully avoided hearing the facts about my office is shameful." 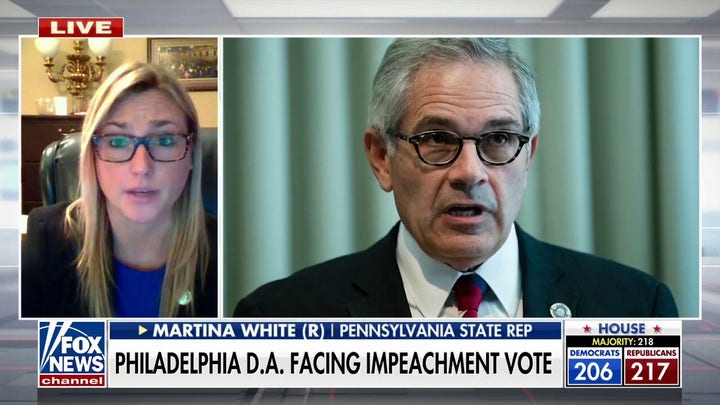 A two-thirds majority is required to remove Krasner from office.