Greg Zanis has made over 26,000 crosses for people lost in tragic circumstances since the Columbine shooting 20 years ago. He's traveled all across the country putting up white crosses with red hearts on them for every life lost to a mass shooting.

But Friday was particularly tough for him. A mass shooting happened in his hometown of Aurora, Illinois, and he delivered his renown crosses by walking from his home to the scene carnage.

Five people were killed last week at a suburban Chicago manufacturing plant by a longtime employee who was fired months earlier. A prayer vigil was held for those victims on Sunday in front of crosses erected by Zanis, as part of his Crosses for Losses mission.

Zanis has spent the past two decades delivering crosses across the country to places like Las Vegas, Sandy Hook and Orlando after mass shootings.

But now, he says he feels like he's "carrying the weight of the whole city on my shoulders."

Zanis says he heard squad cars Friday afternoon and started making crosses when he heard people had died. He placed five crosses outside the Aurora warehouse on Saturday.

"I guess I never thought it could possibly happen here," Zanis told FOX Carolina. "They're the toughest that I've ever made."

It's something he wishes he didn't have to do, but each time he's seen a great impact by the memorials.

"I'm a man on a mission, bringing hope of the cross and showing you weren't alone when this happened," he told FOX 5. "God is in America. God hasn't abandoned us."

Each one of the thousands of crosses is handcrafted in his garage.

"I just relate to victims for that reason," Zanis told Fox News. 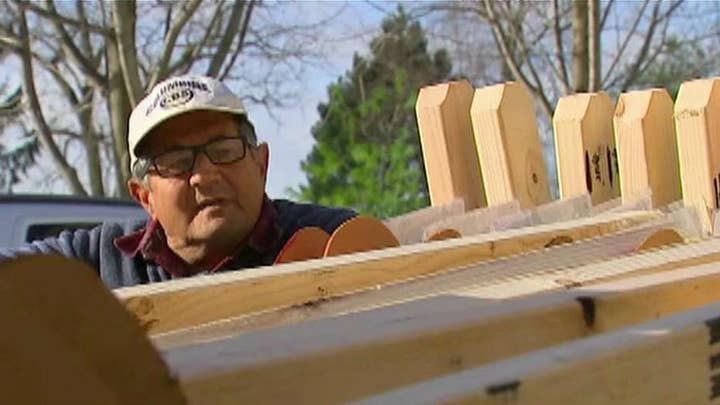 It's his mission to never forget a single victim.

He's filled more than 30 notebooks with family contact information for each victim and he likes to call them on the anniversary of the deaths and remind them they're not alone.