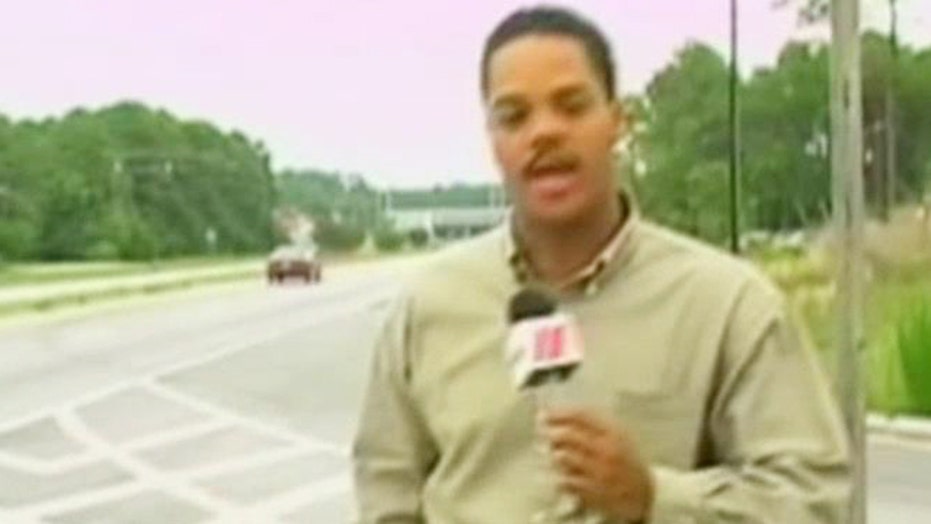 A long reputation of being difficult to work with, complaints of racial discrimination, and a request to seek possible mental health counseling pepper Vester Lee Flanagan's past, but a clear motive for on-air execution of two journalists remains elusive

Flanagan, who reported on-air under the name Bryce Williams, purchased the Glock 9 mm pistol in July from a federally licensed gun dealer in Virginia.

Bureau of Alcohol, Tobacco, Firearms and Explosives spokesman Tom Faison told The Roanoke Times on Thursday that Flanagan said a background check was conducted on Flanagan before the purchase was finalized. The check didn’t reveal any of the criteria that would have prevented him from owning a gun, such as felony conviction or a history of court-ordered psychiatric treatment, the newspaper reported.

Faison said Flanagan purchased multiple guns but didn’t say how many guns he purchased. It’s unclear whether the gun Flanagan used to shoot himself was the same one used to kill WDBJ reporter Alison Parker and cameraman Adam Ward and wound Smith Mountain Lake Chamber of Commerce leader Vicki Gardner. The Roanoke Times reports at least one of the guns was the same make and model as the one Virginia Tech school shooter Seung-Hui Cho used to murder 32 students in 2007 before killing himself, Faison said.

“He could be as mentally ill as the day is long,” Faison said, “but unless someone has been legally adjudicated as such, they can purchase a firearm.”

Flanagan, 41, was ordered by his bosses at the WDBJ station to seek help for his frequent problems with co-workers, according to a July 30, 2012 memo obtained by The Guardian.

"You are required to contact Health Advocate, the employee assistance program," the memo, from then-station director Dan Dennison, said. Flanagan was given four days to make the call. "This is a mandatory referral requiring your compliance. Failure to comply will result in termination of employment."

Flanagan apparently followed up with Health Advocate, since he wasn’t terminated from WDBJ until February 2013.

There are 19 different factors that could disqualify someone from buying a gun in Virginia. Convicted felons, people who have been committed to mental health programs, illegal drug users and illegal immigrants are among the criteria that would prevent someone from getting a gun, according to The Roanoke Times.

The Virginia State Police says about 405,000 checks were made last year and 2,661 attempted purchases were denied.

Lori Haas, state director for the Educational Fund to Stop Gun Violence told the newspaper she’s not aware of any background check system that could have prevented someone like Flanagan from purchasing a gun.

“Even the best background system in the world would not have prevented this shooting,” Andrew Goddard, legislative director of the Virginia Center for Public Safety, told The Roanoke Times.

Flanagan initially planned on getting away with the murders of Parker, 24, and Ward, 27. After shooting and killing himself in his getaway car, police who searched his vehicle found the Glock pistol with multiple magazines and ammunition, a white iPhone, letters, notes, a to-do list and a brief case that contained multiple license plates, a wig, shawl, umbrella, sunglasses and black hat, according to The Associated Press. Flanagan never used any of the disguises as he was tracked down by police on Interstate 66 around 11:30 a.m. Wednesday.

A representative for Flanagan's family issued a statement on Thursday expressing "condolences" for the loved ones of the dead.

“It is with heavy hearts and deep sadness that we express our deepest condolences to the families of Alison Parker and Adam Ward,” the statement said. “We are also praying for the recovery of Vicky Gardner. Our thoughts and prayers at this time are with the victims’ families and the WDBJ7 NEWS family. Words cannot express the hurt that we feel for the victims. Our family is asking that the media respect our privacy.”