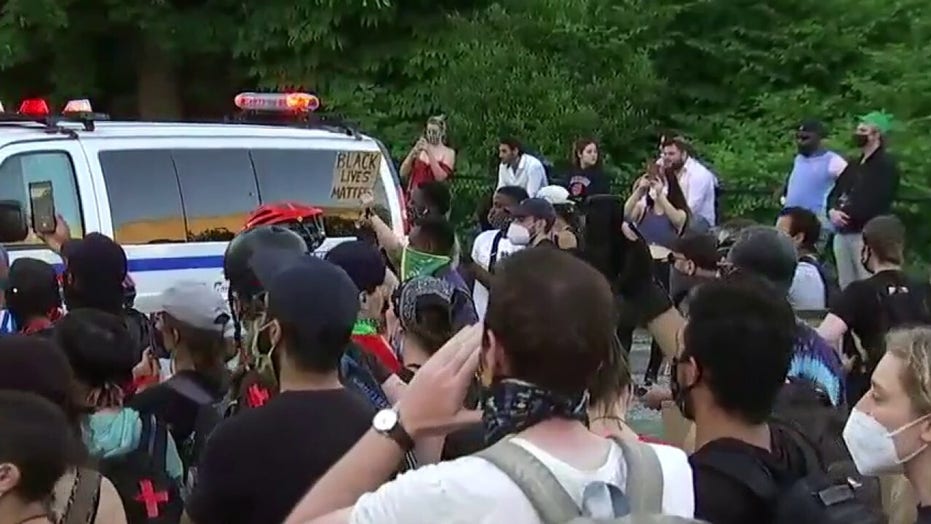 Protests escalate in cities across the country over George Floyd death

Lawmakers including Rep. Ilhan Omar and Sen. Mitt Romney joined the crowds demanding justice for George Floyd in major cities over the weekend -- as some demonstrators seemingly amped up their rhetoric with stronger calls to disband police departments.

Recent days of American protests have been overwhelmingly peaceful. Still, amid tranquil demonstrations to protest racism and police brutality, signs and chants from many "peaceful protesters" called to "abolish the police" -- or "f--- the police."

The turnout continued around the globe even as U.S. cities lifted curfews imposed amid last week’s spasms of arson, assaults and smash-and-grab raids on businesses.

People hold up a sign in Oakland, Calif., Thursday, June 4, 2020, at a protest over the death of George Floyd, who died May 25 after being restrained by police in Minneapolis. (AP Photo/Ben Margot)

A large crowd of Seattle medical workers, many in lab coats and scrubs, marched to City Hall ib Saturday, holding signs reading, “Police violence and racism are a public health emergency” and “Nurses kneel with you, not on you” — a reference to how a white officer was seen pressing his knee on Floyd’s neck for several minutes on May 25.

Atop a parking garage in downtown Atlanta, a group of black college band alumni serenaded protesters with a tuba-heavy mix of tunes. Standing within earshot, business owner Leah Aforkor Quaye said it was her first time hitting the streets.

“This makes people so uncomfortable, but the only way things are happening is if we make people uncomfortable,” said Quaye, who is black.

Theresa Bland, 68, a retired teacher and real estate agent protesting at the Ohio Statehouse in Columbus, envisioned a broader agenda.

Many activists acknowledged police abolition would not happen right away.

The group MPD150, which was “working towards a police-free Minneapolis,” argued that such action would be more about “strategically reallocating resources, funding, and responsibility away from police and toward community-based models of safety, support, and prevention.”

“The people who respond to crises in our community should be the people who are best-equipped to deal with those crises,” the group wrote on its website.

Minneapolis Mayor Jacob Frey told protesters during a Saturday demonstration in the city where Floyd died that he didn’t support the “full abolition” of the police department.

The march was peaceful and featured several speakers, including Omar, D-Minn.

Rep. Ilhan Omar speaking to a crowd gathered for a march to defund the Minneapolis Police Department on Saturday. (Stephen Maturen/Getty Images)

“The Minneapolis Police Department is rotten to the root and so when we dismantle it, we get rid of that cancer and we allow for something beautiful to rise,” Omar said.

The Minneapolis City Council announced on Sunday a veto-proof push to disband the police entirely.

Floyd, a 46-year-old out-of-work bouncer, died after a Minneapolis police officer pressed his knee into his neck for almost 10 minutes even after he stopped responding. His death inspired international protests and drawn new attention to the treatment of African-Americans by police and the criminal justice system.

In North Carolina, the Rev. Christopher Stackhouse recounted the circumstances of Floyd’s death for the congregation.

“It took 8 minutes and 46 seconds for him to die,” Stackhouse said at the memorial service. “But, it took 401 years to put the system in place so nothing would happen.”

The protests have often turned violent.

New York City photographer Kenny Cousins had one of the most viral Black Lives Matter images online demanding young people choose a side for America’s future.

“It’s time for each of us to make a decision—what side of history do you want to be on when the dust finally settles?” he asked on Instagram.

Protestors chanting in front of the Orlando Police Department this past Friday. (Joe Burbank/Orlando Sentinel via AP)

The protests also spread to the heartland.

Protesters march Saturday, June 6, 2020, in New York. Demonstrations continue across the United States in protest of racism and police brutality, sparked by the May 25 death of George Floyd in police custody in Minneapolis. (AP Photo/Ragan Clark)

Norfolk, Nebraska, is a quiet, conservative and predominantly white city of about 24,000 people where public protests are rare, except for an annual rally against abortion. So, when about 300 people gathered on a busy street corner last weekend to voice their outrage at the May 25 death of Floyd, others took notice.

“It was important to do it, especially in the middle of Nebraska,” said rally organizer Eduardo Mora, who lived in a neighboring town. “Are we going to wait for a police brutality incident to happen here? We shouldn’t wait for there to be a life taken.”