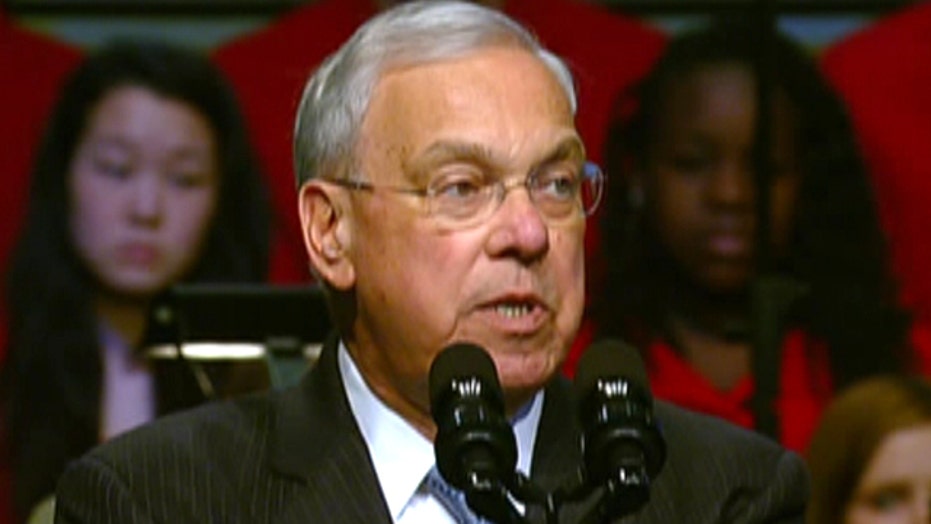 Menino: Boston will always be strong

Survivors, first responders and family members of those killed came together Tuesday to mark the anniversary of the Boston Marathon bombing with solemn ceremonies.

The city's former Mayor Tom Menino, who has been battling health issues, told the audience Tuesday afternoon that, "When the lights are dim and cameras go away, know our support for you will never waver."

"We will never forget what this day means to you… this place will always be strong… a city we love with all our hearts," he told an invitation-only audience of about 2,500 people gathered at the Hynes Convention Center, not far from the marathon finish line where three people died and more than 260 others were injured a year ago, that

In Washington, President Barack Obama planned to observe the anniversary with a private moment of silence at the White House.

There will also be a flag-raising and a moment of silence at the marathon finish line at 2:49 p.m., when the bombs went off.

Patrick talked about the sense of community shared by those after the attack, saying, "There are no strangers here."

Biden told the audience that the courage displayed by the city is an example of the American spirit.

“You have become the face of America’s resolve,” Biden said. He completed his speech saying, "We are Boston. We are America. We respond, we endure, we overcome, and we own the finish line."

Several survivors also spoke, including newlywed Patrick Downes and dancer Adrianne Haslet-Davis, both of whom lost their lower left legs in the bombings.

"We should have never met this way, but we are so grateful for each other," Downes said, describing the sense of community that has developed among those who lost limbs and were otherwise injured.

A solemn wreath-laying ceremony at the site of the twin explosions was the first of many tributes held Tuesday morning. The two wreaths were placed outside Forum Restaurant and Marathon Sports, MyFoxBoston.com reported.

Families of the three victims killed in the bombings -- Martin Richard, Krystle Campbell and Lu Lingzi -- as well as relatives of Massachusetts Institute of Technology police Officer Sean Collier, who was killed in the aftermath of the blasts, were in attendance.

Carlos Arredondo, the cowboy hat-wearing spectator who was hailed as a hero for helping the wounded after the bombings, said he came to the tribute ceremony to support survivors and their families.

"You can see how the whole community gathered together to support them and remember," he told reporters before the program began.

Biden was joined by Menino and Patrick were at the rain-soaked finish line Tuesday afternoon to mark the time where two bombs exploded on April 15, 2013.

Authorities say two brothers planned and orchestrated the attack and later shot and killed Collier during an attempt to steal his gun. Tamerlan Tsarnaev, 26, died following a shootout with police several days after the bombings. Dzhokhar Tsarnaev, 20, has pleaded not guilty to 30 federal charges and is awaiting trial. He faces the possibility of the death penalty.

The Tsarnaevs, ethnic Chechens who lived in the former Soviet republic of Kyrgyzstan and the Dagestan region of Russia, settled in Cambridge, outside Boston, more than a decade ago after moving to the U.S. as children with their family.

Prosecutors have said Dzhokhar Tsarnaev left a hand-scrawled confession condemning U.S. actions in Muslim countries on the inside wall of a boat he was found hiding in following the police shootout.

Patrick, Mayor Martin Walsh and Boston Cardinal Sean O'Malley were among those who attended the ceremony held in a light rain as bagpipes played. O'Malley offered a prayer.