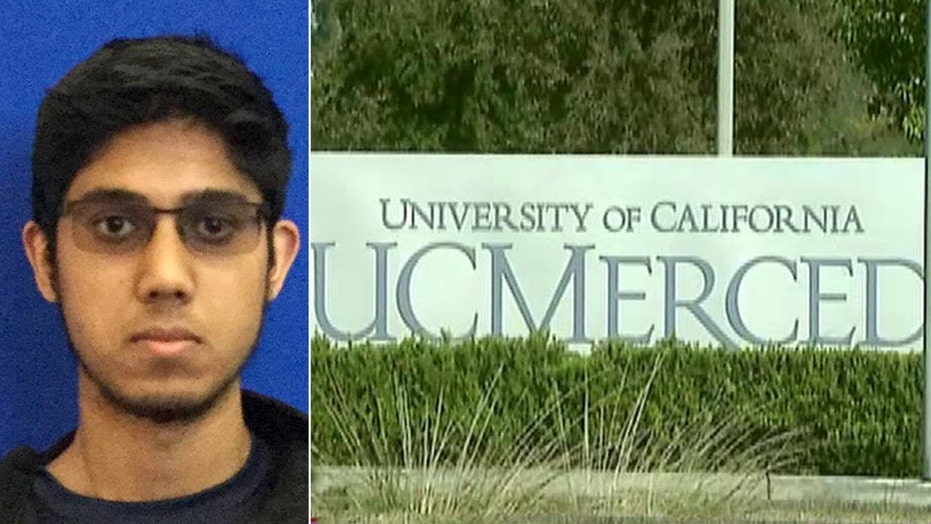 Part of Mohammad's plot included an ambush on police officers

More than four months after a black-clad loner with an Islamist-themed manifesto and a printed ISIS flag in his backpack stabbed four people on a California college campus, the FBI wrapped up its investigation Thursday by saying “it may never be possible to definitively determine” what motivated the bloody rampage.

The inconclusive findings from the probe of the Nov. 4, 2015 attack at the University of California Merced campus followed months of hesitation by local and federal law enforcement to link Faisal Mohammad’s stabbing spree to terrorism.

"Every indication is that Mohammad acted on his own; however, it may never be possible to definitively determine why he chose to attack people on the UC Merced campus,” the FBI’s Sacramento office said in a statement that avoided calling the attack an act of terrorism.

“They go to great lengths to avoid the obvious, that is calling it what it is: Radical Islamic terrorism."

Critics say it followed a pattern in which the federal government downplays domestic terrorism even when there are seemingly obvious links. The flag, the manifesto annotated with reminders to pray to Allah in between stabbings – all reported in November by FoxNews.com, yet not confirmed by the FBI until this week, pointed early on to the 18-year-old Mohammad having been radicalized, say terrorism experts. Even the stabbings themselves, which came as a wave of terrorist blade attacks occurred in Israel, were indicators of an extremist motivation, say experts.

“The Department of Justice is avoiding stating the obvious, which is that an individual who commits violence in the name of ISIS is a terrorist,” said Ryan Mauro, national security analyst for the New York-based nonprofit terrorism research institute Clarion Project. “If someone commits violence and has an ISIS flag and jihadist manifesto in their backpack, they are telling you what their motive was. It's as iron-clad as a suicide note.”

Mohammad was shot and killed by campus police near the classroom where his attack began. All of his victims have recovered.

“In my opinion, this is domestic terrorism at the very least,” said John Price, father of Byron Price, a construction manager who was stabbed as he intervened in the attack. “I am glad the FBI investigation did not find any links to outside terror groups, but Faisal Mohammed clearly paid attention when the Islamic State called for these kinds of lone wolf stabbing attacks.”

Fatalities and Injuries from Terrorist Attacks in United States | FindTheData

In the days following the attack, local and federal law enforcement repeatedly claimed in a series of press conferences that Mohammed was motivated by being excluded from a study group. FoxNews.com, citing documents obtained through a Freedom of Information Act request, reported in November that the narrative clashed with the account his roommate gave Merced County Sheriff’s detectives. Ali Tarek Elshekh’s told detectives Mohammed was “a loner” and “an extreme Muslim,” who threatened to kill another student if he touched his prayer rug, and who dressed all in black before leaving his dorm to try to kill his fellow students.

Both the FBI and campus police have declined for months to provide copies of Mohammed’s manifesto and the photocopied ISIS flag to FoxNews.com, turning down numerous Freedom of Information Act requests by claiming the investigation was ongoing.

Merced County Sheriff Vern Warnke, who initially was involved in the investigation and told FoxNews.com about the manifesto and some of its language, has since refused more than a dozen requests for comment on the case, and also declined to respond to a FOIA requested submitted by FoxNews.com.

“No. 27 was to ‘make sure people are tied down,’ No. 28 was “sit down and praise Allah,'” Warnke told FoxNews.com in an exclusive interview just after the attack. “I remember seeing four or five times, scribbled on the side of the two-page manifesto, where he wrote something like ‘praise Allah.’”

“There was a gruesome statement he made about wanting to cut someone’s head off and kill two people with one bullet, and he planned to shoot the police,” Warnke said. “He did not have a firearm with him and didn’t seem to have a lot of experience with firearms because he thought he could kill two people with one bullet. He reminded himself in the list to raise the gun slowly. He scripted everything out in chronological order.”

Another request for copies of the manifesto and ISIS flag made the UC Merced police on Thursday and Friday, now that the probe is officially concluded, were not immediately answered.

“The Department of Justice continues to process investigations of terrorism cases through the lens of political correctness,” said Dunleavy, who authored the 2011 book “The Fertile Soil of Jihad: Terrorism’s Prison Connection. “They go to great lengths to avoid the obvious, that is calling it what it is: Radical Islamic terrorism. It is as if by doing so, they will calm the public's fear, when in fact all their actions and statements only acerbate them.”

Following the Dec. 2 attack in San Bernardino, in which a jihadist couple killed 14 and wounded 22, federal officials refused to ascribe a terror motive for two days, and only appeared to do so reluctantly after a local FBI agent alluded to terrorism.

It look more than six years for the Obama administration to label the Foot Hood shooting by US Army Maj. Nidal Malik Hasan a terrorist attack, even though the Senate Committee on Homeland Security and Governmental Affairs, in a 2011 report, called the deadly shooting that left 13 people dead “the deadliest terrorist attack within the United States since September 11, 2001.” The administration had for all those years earlier categorized the mass killing by the Muslim major as “workplace violence.”

“Officials seemed to think that in order for an act to be connected to a terrorist organization, the deranged individual must have been in direct contact with Abu Bakar al Baghdadi specifically telling him what to do,” said Dunleavy. “They evidently haven't learned that the methodology used by radical Islamic groups like ISIS has changed. It has morphed and adapted to utilize social media and the Internet.”