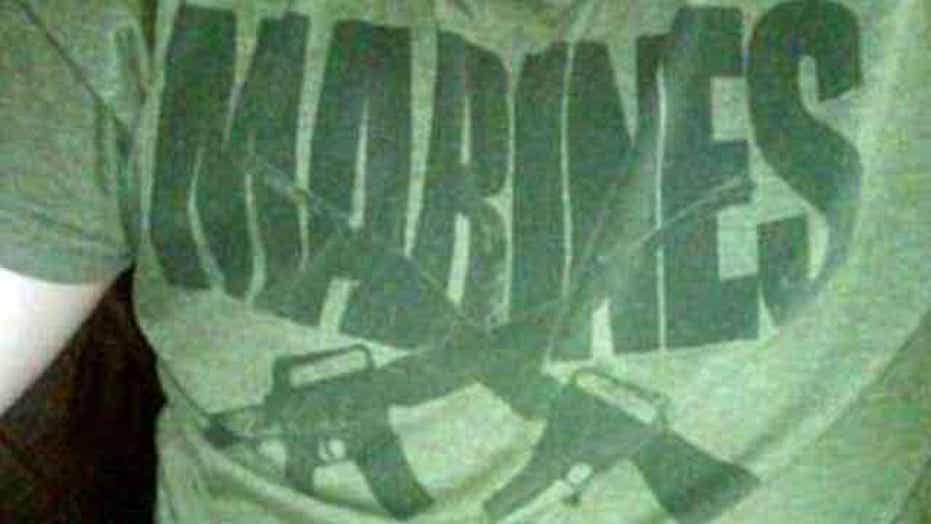 An Illinois father wants a school district to reconsider its dress code after his son was asked to remove a U.S. Marines T-shirt or be suspended, FoxNews.com has learned.

Daniel McIntyre, 44, of Genoa, told FoxNews.com that his 14-year-old son, Michael, was asked to remove the T-shirt by eighth-grade teacher Karen Deverell during reading class at Genoa-Kingston Middle School on Monday. Deverell, citing the school’s dress code, said the garment’s interlocking rifles was problematic and had to be removed from sight, McIntyre said.

“My son is very proud of the Marines, and, in fact, of all the services,” McIntyre said. “So he wears it with pride. There are two rifles crossed underneath the word ‘Marines’ on the shirt, but to me that should be overlooked. It’s more about the Marines instead of the rifles.”

McIntyre said his son was initially threatened with suspension before complying with Deverell’s request to turn it inside out. He has worn the T-shirt to school many times before without incident, McIntyre said.

Brett McPherson, the school’s principal, referred questions to Genoa-Kingston Superintendent Joe Burgess, who reiterated that the shirt is not in violation of the district’s dress policy.

“We’ve been accused of a lot of things, but our middle school is well-known for its support of the armed forces,” Burgess told FoxNews.com. “That’s why this is so disheartening to all of us.”

Deverell did not inform school officials of the incident, Burgess said, adding that McPherson would have quickly determined the shirt to be a non-issue if consulted.

“Nobody took the next step of asking the principal or making them aware of it,” Burgess said. “The teacher is obviously allowed to question anything they feel might be a violation of dress code, but again, had an administrator been allowed to respond, this could have been taken care of yesterday.”

Students within the district are expected to wear clothing in a “neat, clean and well-fitting manner,” according to a copy of the policy, which was obtained by FoxNews.com. While addressing “violent behavior,” gang symbols and other inappropriate images, it does not explicitly ban images of guns and other weapons.

Hats, bandannas and sunglasses are also banned inside the building. Students who violate the dress code will be asked to wear their gym uniform, it reads.

District officials, meanwhile, said its students are dutiful patriots who support U.S. troops as much as they can.

“The students and staff regularly write letters of support to the troops, and hold patriotic ceremonies for Veterans Day and Patriots' Day,” a statement obtained by FoxNews.com reads. “We very much support the armed forces and were disheartened to learn of this matter through the media. The administration and school handbook agree that this shirt is not a violation of the dress code. We also take school safety very earnestly and it needs to be recognized that is a topic that we also take very seriously and support our students and staff in providing a safe environment to learn, teach and work in on a daily basis.”

McIntyre said he believes the incident is likely an overreaction to recent mass shootings, particularly to the Dec. 14, 2012, massacre at Sandy Hook Elementary School in which 20 students and six staffers were killed after Adam Lanza killed his mother at their Connecticut home.

“I backed him up and he knows that,” McIntyre said of his son. “This is not right. This policy that they have in place can obviously be loosely interpreted, so they need to change it.”