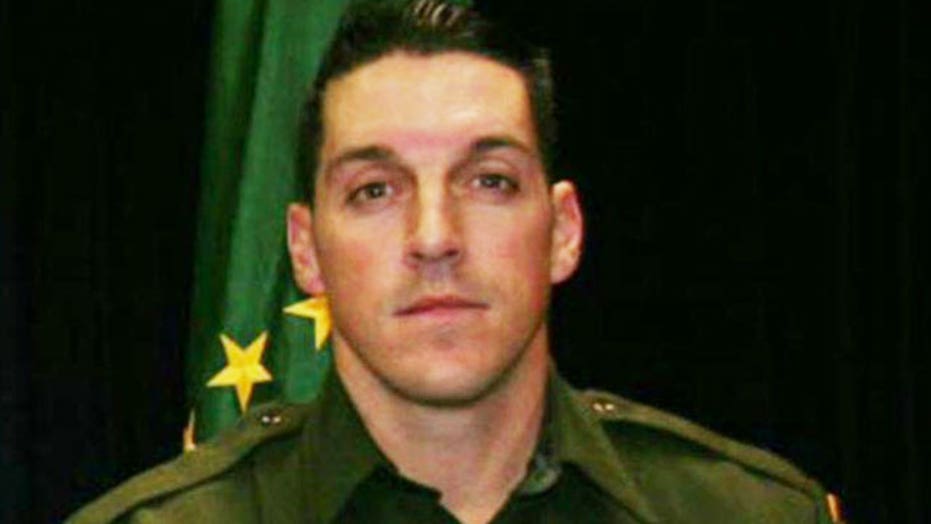 TUCSON – Kelly Terry-Willis did not hesitate to look into the eyes of the orange-jumpsuit-clad man involved in the shooting death of her big brother, telling him his "evil decision" took from her a loving confidant, dance partner and dedicated family man.

She turned to face Manuel Osorio-Arellanes numerous times as she spoke about her brother Brian Terry, who was killed during a December 2010 shootout near the U.S.-Mexico border. Osorio-Arellanes was sentenced Monday to 30 years on a federal murder charge in Terry's death, making him the first person involved in the killing to go to prison in the U.S.

The case brought to light the botched Fast and Furious operation in which federal agents trying to track guns allowed criminals to buy them for weapons smugglers. Instead, agents lost track of 1,400 of the 2,000 guns involved in the sting operation, including two weapons found at the scene of Terry's killing.

Addressing him by name, Terry-Willis told Osorio-Arellanes that he was a coward who had chosen the wrong path in life.

She described her brother as a loving and devoted family man and friend. "He was a man who loved God and life."

The two loved to have dance-offs, whether in public or private. "I would give anything to have one more dance-off with my brother," Terry-Willis said.

U.S. District Court Judge David C. Bury asked Osorio-Arellanes if he wanted to speak, but he initially declined through his attorney, Clay Hernandez. Hernandez said the defendant was extremely nervous and felt he lacked the proper education to speak.

Nudged by the judge, Osorio-Arellanes finally apologized several times in Spanish and reiterated that he, too, was wounded in the shootout. He was shot three times and spent two weeks in the hospital.

Prosecutor Todd Robinson took issue with the notion that Osorio-Arellanes, from the state of Sinaloa, Mexico, was a victim.

"There is one victim and one victim only," he said. "That is Brian Terry."

Bury also was critical of Osorio-Arellanes as he gave him the 30-year sentence that prosecutors recommended.

"You illegally entered the United States with the sole intention of committing armed robbery," he said. "There is no doubt that your prey was human. Law enforcement got in your way, as is their duty, and as a result a good agent died."

Terry, 40, died a few weeks before he was to visit his family in Michigan, where he grew up.

Michelle Terry-Balogh, another sister, cried as she read a prepared statement.

The shootout erupted just north of the Arizona border city of Nogales as Osorio-Arellanes and four other men who are accused of sneaking into the country to rob marijuana smugglers approached Terry and three other agents who were targeting such rip-off crews.

Osorio-Arellanes was the only person arrested at the scene, while four other alleged rip-off crew members fled to Mexico. Two of the four are now in Mexican custody, while two others remain fugitives.

Osorio-Arellanes maintains he was not the shooter who killed Terry, and prosecutors agree that evidence supports his claim. Still, they say he is liable because he was a voluntary participant in the rip-off crew.

Federal authorities who conducted the Fast and Furious investigation have faced criticism for allowing suspected straw buyers for a smuggling ring to walk away from Arizona gun shops with weapons, rather than arresting them and seizing the guns.

Osorio-Arellanes' guilty plea in October 2012 marked the biggest conviction to date in a case that embarrassed the federal government and prompted a series of congressional investigations. Members of the gun-smuggling ring that was being monitored in Fast and Furious have pleaded guilty to federal charges.

After the sentencing hearing, Terry's family released a statement thanking the Border Patrol, the FBI, and prosecutors who were involved in the case.

"We are not celebrating. Today we recognized justice has been served and we believe the 30 year sentence imposed on this particular defendant is an appropriate sentence," the statement read. "We remain hopeful that all suspects in this murder will be brought to justice."