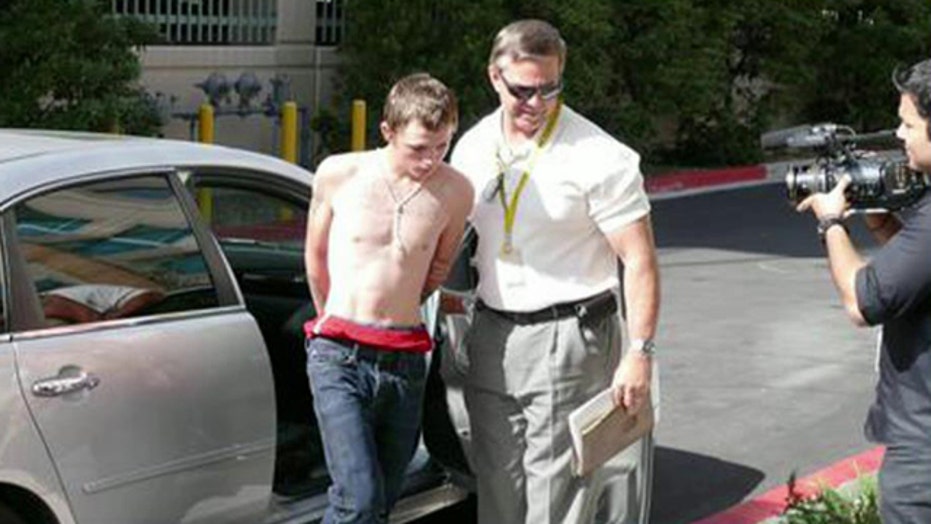 Police made an arrest Thursday in the mysterious road-rage killing of a Las Vegas mother, apprehending a neighbor who had a history with the family before the shootout.

The suspect, identified by police as Erich Nowsch, 19, was led into a car by an officer and taken to police headquarters for questioning after SWAT teams surrounded his home.

He was arrested on suspicion of murder in the killing of 44-year-old Tammy Meyers, Las Vegas police Capt. Chris Tomaino said. He added that authorities are still looking for one other suspect in the killing.

"We still have a lot of investigative work to do," Tomaino said.

The husband of the victim said the victim knew Nowsch and became a mentor of sorts, giving him money and food and urging him to dress properly. Nowsch was shirtless when he was arrested.

"We know this boy," Robert Meyers said. "I couldn't tell you this before. He knew where I lived. We knew how bad he was but we didn't know he was this bad."

The case has received significant attention since police initially said Meyers was killed by an angry driver who followed her home after she gave her teenage daughter a driving lesson.

She was removed from life support on Valentine's Day as police hunted for a suspect, and donations for her funeral costs quickly poured in to a fundraising site.

The sympathy morphed into skepticism after police revealed that Meyers was not followed home, and instead dropped her daughter off and picked up her 22-year-old son, armed with his 9 mm handgun, to try to confront the driver who had frightened her earlier.

They went looking for the driver, followed the vehicle and eventually went home. The silver car then showed up outside the Meyers' home and a shootout occurred. The mother was shot in the head outside the home.

"I did what I had to do to protect my family," Brandon Meyers, 22, said earlier this week. "Everyone can think what they have to think. I did it for a reason. And I'd do it for anyone I love."

Melissa Mours, who lives next door to the suspect, said several people showed up at her neighbor's house this week and knocked on the door, including at least one Meyers family member.

Family members told police there were three people in the silver car.

Earlier, as authorities worked to coax Nowsch to surrender, Robert Meyers arrived and was emotionally distraught as he tried get close to the home that police had surrounded.

As he walked past the yellow police tape, he was stopped by a police officer who tried to calm the man down.

"It's OK," the officer could be heard telling him.

"No it ain't OK!" the husband shouted back, his voice breaking up.

The officer asked the man to step back behind the yellow tape, and he stormed off past reporters.

"Are you all happy? You made my wife look like an animal," he told reporters. "There's the animal, a block away!"

He said outside his home later Thursday that his wife spent countless hours "consoling this boy."

"She fed him, she gave him money, she told him to pull his pants up and be a man," Robert Meyers said.

Neighbor Brian Atkinson said he was awakened at about 11:30 a.m. by bullhorns and the sound of a helicopter as police showed up to arrest the suspect.